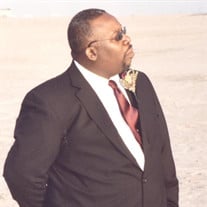 TOWNS, William M., Jr. “BT”- 59, of Morristown and longtime resident of West Cape May died on Tuesday, November 4, 2014. He was born in Morristown to the late William Towns, Sr. and Harriet (Last) Towns. BT worked for the Cape May County MUA and served as an active member of the Macedonia Baptist Church, Cape May. He was an avid New York Giants fan and was well known in his hometown as the alto sax player of the group "Soul Toys." BT will be dearly missed by his loving family which includes his wife of 35 years, Lynda Anderson-Towns; his twin sons, Jason and Joseph; his daughter, Whitney; his brothers, Anthony (and Jackie) Towns and Gerald Towns; his sister, Teri Towns; his grandson, Ethyn Williams; his nieces, Pia Teabout, Desiree Teabout, Lisa Hamilton and his nephews, Dorian Teabout and Aaron Hamilton. BT’s funeral service will be held on Saturday (Nov. 15th) at 11AM in Christ Gospel Church, 2209 Rte 9, Whitesboro, where friends will be received for his viewing from 10AM to 10:50AM. Interment will follow in the Cold Spring Cemetery, Lower Twp. Memorial contributions are suggested to: The Ruthe Anderson Scholarship Fund, 450 Green Street, West Cape May, NJ 08204.

The family of William "BT" Towns created this Life Tributes page to make it easy to share your memories.

Send flowers to the Towns family.