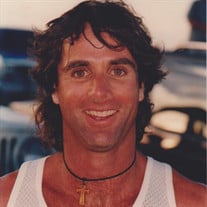 William “Will” M. Mendo, 56, of Cape May, NJ, passed away peacefully on Thursday, February 4, 2021. Will was born January 30, 1965 in Cape May Courthouse, NJ to Anthony “Tony” and Gladys Mendo. Will graduated from Lower Cape May Regional High School with the great class of 1983, and from Stockton College in 1989 with a Degree in Liberal Arts and where he made the Dean’s List in his Senior Year. Will was a favorite English teacher at Lower Cape May Regional High School from 1989 to 1991, and at Middle Township High School (MTHS) from 1991 until he retired in 2016. “Mendo” as he was lovingly known by MTHS Athletics, coached many sports over the years. His beloved MTHS golf team excelled under his leadership to 171 victories and won the South/Central Group II Team Championship in 2010, 2011 and 2012. 2011 was an especially rewarding year for Will and his golf team: Will was honored as Coach of the Year, and the Panthers went 19-0 for the first perfect season in school history while winning the CAL National, the Carl Arena/Al Rifkin Memorial Tournament and South-Central Group II titles. In his recent “retirement” stint at Tony’s Produce, he was adored by all his customers and coworkers. Will was a lifelong resident of Cape May. He was a Cape May Beach Patrol Lifeguard from 1983 to 2005, honored as Lifeguard of the Year in 1988. “Wheels” Mendo also won the Fastest Man in the Beschen-Callahan Memorial Lifeguard Races and was the anchor for the winning 4x100 relay team. He loved his role as Cape May’s favorite pirate Captain Kidd, dressing up every year for nearly 30 years. Many local and visiting kids alike anxiously awaited summer sightings of Captain Kidd, either in the July 4th parade or the annual Congress Beach treasure hunt. Will loved to be outside. Splitting wood, surfing, even in the freezing winter waves; he was an avid skier, taking many trips to Colorado and Vermont over the years, and could be found ice skating on Lily Lake when frozen. Will loved all sports and cooking for his Sunday card game buds while cheering on his Raiders football team. He played on multiple softball teams over the years. The list of nicknames he was given by friends is endless and colorful. Will was a lifelong parishioner at Cape May Our Lady Star of the Sea Catholic Church. He is survived by his beloved mother Gladys, his brothers David (Lisa), AJ (Karen), and Joseph (Buffy); Aunts Doris, Ruth Mary (Terry) and Eithne (Peter); nieces Melissa and Julianna; nephews Erik and Anthony; and great nieces Sophia, Callie Rae and Ellie. Also, many cousins across the US and abroad. Will is pre-deceased by his father Anthony “Tony”, his Aunt Linda, Uncles Bob (Maryann) and John (Jane), and his cousin Sherry. He leaves behind a grieving community of family and friends far and wide, whose lives he touched in uncountable ways over his short 56 years. He quietly gave so much to friends, coworkers and anyone who knew him. His passing has created a void that cannot be filled. He will be greatly missed by so very many. Relatives and friends will be received by Will’s family on Saturday (Feb. 13th) from 9:30am until 11:15am in Cape May Convention Hall, 714 Beach Drive, Cape May with Will’s funeral ceremony to follow and begin at 11:30am. For those who cannot attend physically, Will’s ceremony will be livestreamed. The livestream will be active at 11:15am and is accessible by clicking this link https://client.tribucast.com/tcid/87805622 Masks and social distancing are required. Interment will follow in St. Mary’s Cemetery, Cape May. In lieu of flowers, the family asks for donations to be sent to the Will Mendo Memorial Scholarship Fund, Middle Township High School, 300 E Atlantic Ave, Cape May Court House, NJ 08210.

The family of Will Mendo created this Life Tributes page to make it easy to share your memories.