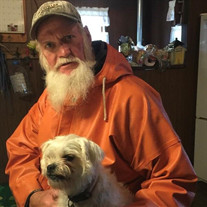 ROBSON, DAVID “WAYNE” – 61, lifelong resident of the Cold Spring Section of Cape May County, passed away on Friday, July 19, 2019. Wayne began his long career as a commercial fisherman at a very young age. He was also a welder by family trait and enjoyed working with family members at several different businesses. He was a hard worker and dedicated to whatever the task was he was working on at each time in his life. He was a “Get’er Done” type of guy. Wayne was full of personality and liked to raise hell, especially in his younger days. He was always down for a good time. He was known as “Wayne from down the lane” to many friends and “Pirate Pop-Pop" to his grandchildren. Wayne could always be found at the farm, listening to some country music, and hanging out with a cold drink in his hand. If you needed a laugh he was always up to some sort of antics and he’d have you laughing for hours with his stories or famous phrases. “Maybe you didn’t hear me”, “Keep it simple, stupid”, “See anybody you know?”, “What’s kickin Chickin”, “Gotta eat”, etc... Tractor rides through the cemetery were his specialty. There was always a fire burning outside no matter what time of year. He enjoyed his garden, chickens, giving people a hard time, collecting “treasures” and making sure his family/friends were taken care of. His heart was held by anything fishing related and his love for his family and friends was endless. Many knew they could swing by Academy Lane if they needed a hand with something. He will be missed by many and in his own words, “This trip is over, time to go home. See you on the other side.” AARGH!!! He is predeceased by his parents, Allan and Jean Robson; brothers, Steven Robson and Allan Robson, III. Wayne is dearly missed and forever loved by his family which includes his three daughters, Suzanne Robson, Jenny (and Chuck) Desaulniers and Lacey Willis; brothers, Ronald (and Jan) Robson and Gary (and Debbie) Robson; 8 grandchildren; as well as many nieces, nephews, cousins, dear friends and four-legged best friend Pookie. Wayne’s funeral ceremony and celebration of life will take place on Thursday (July 25th) at 10am in the Spilker Funeral Home, 815 Washington St., Cape May where friends will be received from 9am until 10am. Interment will follow in Cold Spring Cem., Lwr. Twp. In lieu of flowers, memorial contributions can be made to Alex’s Lemonade Stand, https://www.alexslemonade.org/donate 111 Presidential Blvd. – Suite 203, Bala Cynwyd, PA 19004. Info and condolences: spilkerfuneralhome.com

The family of Wayne Robson created this Life Tributes page to make it easy to share your memories.