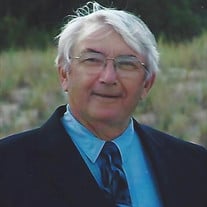 Walter Stanley Kowalski Sr. (‘Ski’), Age 84, of Allentown, NJ, formerly of Cape May, NJ passed away on Tuesday, January 12, 2021. He was born in Trenton, NJ to Stanley Joseph Kowalski and Antoinette Aleksandrowicz. He joined the US Coast Guard after graduating from High School and was stationed in Cape May, NJ where he met the love of his life Patricia J Rigdon and they were married April 7th, 1962. Walt worked on the NJ Turnpike in Hightstown, NJ as Inventory Control Supervisor for his career. After his retirement, Walt and Pat turned their property on Columbia Ave in Cape May NJ into a Bed and Breakfast, called Pharos Guest House. They ran Pharos until 2016 when they both formerly retired. Walt was a Freemason of the Mercer Lodge in Trenton NJ. Throughout his life he enjoyed boating, visiting the Eastern Shore Maryland, spending time with family, and visiting with his grandchildren, Ryan and Alessia. Walt was very social, gregarious, enjoyed talking to people, meeting new people, (talking politics). Walter is pre-deceased by his parents, Stanley Joseph Kowalski and Antoinette Aleksandrowicz, and close cousin Dr. Alex Krawczun. Walter is survived by his loving wife of 58 years, Patricia Kowalski; son Walter Kowalski Jr and wife Bernadette, Scott Kowalski and wife Bridget, Kim Guaraldi and husband Gino, Grandchildren Ryan Tilly and Alessia Guaraldi, and close cousin Dr. Mary Rorro. Funeral Services were held on Wednesday (Jan. 20th) at 11am in the SPILKER FUNERAL HOME, 815 Washington St., Cape May. Interment followed at Cold Spring Cemetery, Lower Township, New Jersey. A graveside Memorial Service will be held when COVID-19 is under control and it is safer to travel.

Walter Stanley Kowalski Sr. (&#8216;Ski&#8217;), Age 84, of Allentown, NJ, formerly of Cape May, NJ passed away on Tuesday, January 12, 2021. He was born in Trenton, NJ to Stanley Joseph Kowalski and Antoinette Aleksandrowicz. He joined the... View Obituary & Service Information

The family of Walter "Ski" Kowalski created this Life Tributes page to make it easy to share your memories.