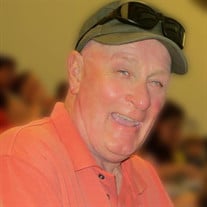 The beloved Walter David Deegan, 76 of Wildwood Crest NJ returned to our Lord on March 21st 2021. Walt was born February 16th 1945 in Philadelphia PA. While growing up in Northeast Philadelphia he attended St. Bart’s Elementary school. After graduating from Father Judge High School he continued his studies at La Salle University. Walt’s countless acts of kindness touched many lives throughout his lifetime. His passion to help others and his community began 40 plus years ago when he started his basketball coaching career at St. Joan of Arc School in Marlton NJ. He also was involved in the growth of girls basketball within the Marlton Rec Council system. He later became an Assistant Girls Basketball Coach at both Paulsboro High School and Holy Family College. Walt served as the Director of Girls Basketball for the AAU’s Mid-Atlantic region and was the founder of the Tri-state Tar Heels AAU Basketball Club in South Jersey, which helped countless players earn scholarships. Walt “Coach” Deegan is the founder of the KAC Scoop Taylor Summer Slam Basketball tournament which he ran for more than 30 years, bringing wonderful memories to thousands as players came to the South Jersey Shore to play basketball and enjoy Cape May County. Walt was also passionate about politics serving as President of the Greater Wildwood Democratic Club and also as a Wildwood Crest Municipal Leader. Walt enjoyed a successful professional career in Telecom Sales and Account Management working for companies such as AT&T, Telcove and several others. Walter Deegan is survived by his wife of 53 years, Maryann Deegan (nee Capriotti), Daughters: Angela Deegan Evans (Jeffrey) and Maureen Deegan Brown (Alan), Son: Daniel Deegan (Emily), Grandsons: Mason and Maxwell Brown, Sister: Donna Deegan Gagliano, mother-in-law: Rose Capriotti. Son of the late Claire Kelly and Howard Deegan and son-in-law of the late Vincent Capriotti. A “Celebration of Life” ceremony will be held at a later date “TBD” due to the current circumstances surrounding the pandemic. If you are interested in attending Walt’s Celebration of Life ceremony, please send your contact information (name, email & phone #) to [email protected] Once the date is determined an announcement will be made & you will be contacted with details about the event. Per Walt’s wishes, this will be a happy “Irish” celebration. In lieu of flowers please consider a donation to https://www.autismspeaks.org in Walt’s honor. Walt Deegan was loved by so many family and friends, he will be deeply missed and will forever be in our hearts.

The family of Walter Deegan created this Life Tributes page to make it easy to share your memories.