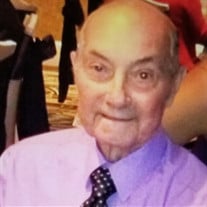 MICKA, Walter J. – 89, of Cape May, NJ and formerly of Delaware County, PA, passed away peacefully on Tuesday, July 16, 2019 in the comfort of his home. He was an Eagle Scout as a youth, attended Saint Roberts grade school, and was a graduate of Saint James Catholic High School in Chester, PA, “Class of 1948”. Walt proudly served in the U.S. Army during the Korean War. He was well known as a leader in the millwork industry for decades, even owning his own millwork company at one time. He was a former president of the Chester Jaycees. He was a longtime coach, umpire, and president of the Toby Farms Athletic Association. He was a Knight of Saint James and a 2010 inductee to the St. James Wall of Honor. Walt’s true passion was restaurant management. He brought new life to the Cape May VFW when he took over as manager. They experienced much success during his time there. An avid sports fan, Walt loved to watch his Phillies and Eagles play. He was predeceased by his first wife, Emily (nee Pulcher); his second wife, Gloria McCullough and his sister, Dolores Koch. Walt is dearly missed and forever loved by his family which includes his six children, Walter (and Monica) Micka, James (and Colleen) Micka, Kathryn (and Randal) Scaricaciottoli, Mariann (and Thomas) Giannone, Thomas (and Sherry) Micka and Robert Micka; stepsons, Steve (and Peggy) McCullough, Bruce (and the late Diane Bove) McCullough and Sandy (and Joanne) McCullough; brother, John (and Paula) Micka; 12 grandchildren and 7 great grandchildren. Mass of Christian Burial will be celebrated on Wednesday, July 24th at Our Lady Star of the Sea Church, 525 Washington St., Cape May where friends will be received from 12:15pm until 1:20pm with mass to follow at 1:30pm. Interment will be private and at a later date. In lieu of flowers, memorial contributions can be made to the St. James Alumni Association, 1499 9th St., Crum Lynne, PA 19022. (Spilker Funeral Home, Cape May) info and condolences: spilkerfuneralhome.com

MICKA, Walter J. &#8211; 89, of Cape May, NJ and formerly of Delaware County, PA, passed away peacefully on Tuesday, July 16, 2019 in the comfort of his home. He was an Eagle Scout as a youth, attended Saint Roberts grade school, and was a graduate... View Obituary & Service Information

The family of Walt Micka created this Life Tributes page to make it easy to share your memories.