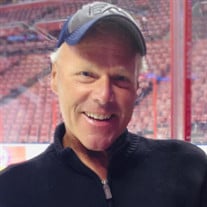 “All people die but not all people live.” Victor Baron, age 62, lived everyday large, full of gusto, positivity, and happiness. Victor sadly passed on May 18, 2021. Survived by his beloved wife of 33 years, Lisa Marie; his pride and joy his sons, Christian Victor Baron and Zachary Mark Baron; his mother-in-law, Carmella; his much-loved in-laws along with his nieces, nephews, cousins and great-nieces and nephews. Pre-deceased just a year ago by his loving and adoring mother, Helen “Pat” Baron. Also pre-deceased by his father, Alfred Baron and his brother, Alfred (Alvy) Baron. Victor was a warrior in every sense of the word. At age 23, he battled and beat cancer only to have it leave a ravishing effect on his body, eventually leading into an 18-year war with heart disease. However, with his iron will, Victor fought back time after time. He threw every punch he had at his heart failure up to the very end. Despite all his health battles, Victor, a master carpenter, managed to build his own real estate development company. He provided expertly renovated homes in Philadelphia to those who may not otherwise have had the opportunity to enjoy the comforts of a beautiful home. Victor could masterfully turn what others thought a heap of rubble into a beautiful abode. An avid, strong ice hockey player, Victor loved his time at the Wissahickon Skating Club in Chestnut Hill, coaching youth ice hockey and playing men’s league. Nothing gave him more joy than watching his sons play ice hockey from the time they were tiny mites through their college playing careers. Vic did all he could never to miss their games. Next to watching his sons play, Vic absolutely loved his Philadelphia Flyers. As a young boy he sold brochures at the old Spectrum just to get a chance to watch them play. As life went on, he always made it a point to catch every game. When not at an ice rink, summers brought the best. From Poverty Beach to Bird Beach, to the Hagy Jetty- he absolutely loved the Cape May beaches. It was his paradise where he would spend hours throwing discs. Whether you were a friend, a member of the Cape May Beach Patrol, or a passerby, Victor would engage anyone for a toss. Although it seemed so simple-there was so much power behind a simple frisbee throw with Victor. It was his way of saying whatever you are going through in your life- a frisbee toss can lift your spirits and distract you from it. The beach was ultimately Vic’s second home and settling in Cape May year-round brought a peaceful serenity to him. The family would like to give a special, heartfelt thanks to the incredible cardiac intervention team of Dr. Robert Wilensky at The Hospital of the University of Pennsylvania. Dr. Wilensky and his team performed miracle after miracle through the years to boost Victor’s strength and help him to soldier on. Also, an overwhelming amount gratitude is sent to the angelic nurses from the CICU at Temple University Hospital who all joined Victor in his final battle. They fought alongside him providing a comfort that was over and above the call of duty. One nurse summed up Victor best with just a sentence: “I met and spoke to Victor for just five minutes, and I knew right away, he was such a special guy, I would never forget him.” Relatives and friends are invited to Victor’s Funeral Mass which will be celebrated on Tuesday, the 25th of May 2021 at 12:30 p.m. at Our Lady Star of the Sea Church, 525 Washington St, Cape May, New Jersey. In lieu of flowers, the family requests donations to The Nature Conservancy @ https://www.nature.org/en-us/get-involved/how-to-help/places-we-protect/south-cape-may-meadows in Victor’s honor.

&#8220;All people die but not all people live.&#8221; Victor Baron, age 62, lived everyday large, full of gusto, positivity, and happiness. Victor sadly passed on May 18, 2021. Survived by his beloved wife of 33 years, Lisa Marie; his pride... View Obituary & Service Information

The family of Victor Baron created this Life Tributes page to make it easy to share your memories.