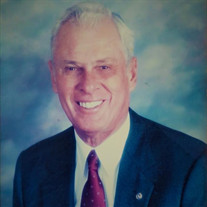 ANNOUNCEMENT OF CELEBRATION OF LIFE CEREMONY Tom's Celebration of Life Ceremony will take place on Monday (July 5, 2021) at 10:30am in the Episcopal Church of the Advent, 612 Franklin Street, Cape May, where Tom's family will receive friends from 10:00am until 10:30am and then again after the ceremony as well. The ceremony will be livestreamed and access will be available by clicking this link https://www.youtube.com/watch?v=9HEGIjWsFO8 Thomas Millet Hand Cape May lost one of its true gentleman moments after the Christmas Star appeared in the sky when Tom Hand passed away peacefully a day after his 90th Birthday and was welcomed into the open arms of our loving God on December 21st. Tom was preceded in death by his mother, Mary Mercer Worth Hand and his father, T. Millet Hand. He is survived by his wife, the love of his life, Ruth Berryman Hand and three daughters who cherished him dearly: Sharon Hand Maloney(Bill) of Davidson, NC, Kathleen Hand Holsinger(Mike) of Linden, MI, and Mary Hand Van Cleave(Troy) of N. Cape May, NJ. He is also survived by his 7 grandchildren who adored him: Christina Maloney Murphy(Chris) of Charlotte, NC, Lauren Maloney Nelson(Tony) of Huntersville, NC, Hunter Holsinger of East Lansing, MI, Holden Holsinger of Haslett, MI, Amber Van Cleave of N. Cape May, NJ, Colton Van Cleave of N. Cape May, NJ and Heather Holsinger Rogers(Brian) of Stevensville, MI. He is also survived by his 8 great-grandchildren who meant the world to him: Graham Murphy, Nolan Murphy, Will Murphy, Claire Nelson, JJ Nelson, Dane Nelson, Xavier Rogers, and Reece Rogers. Tom was born in Philadelphia, Pa. on December 20, 1930 and after his birth lived in Cape May on Stockton Ave. with his parents and next to a number of relatives up and down the street. When his mother passed away at an early age, he lived with his grandparents next door. He especially adored his grandfather and respected the manner in which he treated people no matter who they were and this impacted the way Tom treated others in his lifetime. He graduated from Cape May High School in 1949 in a class of 39 and remained a loyal and trusted friend to them all for many years. He served honorably in the United States Coast Guard from 1950-1953. He then went to George Washington University and graduated in the Spring of 1957 where he majored in Journalism and minored in History. It was there where he met, Ruth Berryman, the true love of his life. They married in the Fall of 1957. Tom invested himself and his career in the family-owned, weekly newspaper, The Cape May Star and Wave, a local, journalistic institution that was in the Hand Family for more than a century. It was his grandfather who ran the newspaper before him and Tom continued the family legacy of unbiased, quality local reporting. He also put so much of himself and his notable talents into the City of Cape May, a place he loved so much, where he was active in Kiwanis, Rotary, the Chamber of Commerce, the American Legion and where he served as Jr. and Sr. Warden on the Vestry at the Episcopal Church of the Advent in Cape May. His main goal was to make a difference in people's lives, always to have purpose, and to enjoy friendships along the way. He accomplished many things in these organizations but his good, lasting friendships were his biggest. Tom purchased the "Pink House" in 1970 and moved it to Perry Street next to the Star and Wave building and saw to its restoration. He did this to preserve this piece of the City's history as a tangible demonstration of his love for Cape May and its meaning for his family, present and past. Upon selling the Star and Wave in 1989, he took his interest and knowledge of local Cape May County history and worked at Cold Spring Village for a number of years. Many would see him there at the Dennisville Inn where he did a full historical interpretation of the Inn and often would speak about local area history. He was a huge baseball fan. He played the game in high school and afterwards and always loved the camaraderie and competitive spirit of the sport. His favorite major league team was the LA Dodgers and his team went all the way to win the World Series this year-such a great gift for his 90th birthday! He was a man of strong faith, always generous with his time and expertise, a wonderful role model and mentor and selfless to the very end. He loved the beach, riding the waves, barbecuing, walking through Cape May, enjoying a good laugh, and his whiskey sours were always a hit with family and friends! His life work and proudest achievement was his family. He loved his family more than himself and was always the driving force for encouragement and support. His loving and impassioned notes and letters he would write to his family will live on as a primary example of his altruistic love. His passing on the night when the Christmas Star was most visible and only occurring every 800 years is no coincidence. A life like his only comes along this same number of years. He was our mentor and our hero and he will be missed by so many...especially his family. In lieu of flowers the family asks to consider donations in Tom's memory to the Episcopal Church of the Advent-612 Franklin Street, Cape May, NJ 08204. Or, Kiwanis Club of Cape May-1041 Beach Avenue, Cape May, NJ 08204. Or, Historic Cold Spring Village- 720 US 9, Cape May, NJ 08204. Cards of condolences can be sent to Ruth Hand, Brookdale Cape May, 591 Rt. 9 South, Apt. 106, Cape May Courthouse, NJ 08210

ANNOUNCEMENT OF CELEBRATION OF LIFE CEREMONY Tom's Celebration of Life Ceremony will take place on Monday (July 5, 2021) at 10:30am in the Episcopal Church of the Advent, 612 Franklin Street, Cape May, where Tom's family will receive friends... View Obituary & Service Information

The family of Tom Hand created this Life Tributes page to make it easy to share your memories.