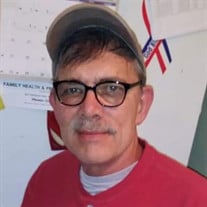 Twombly, Timothy W. “Tim” - 65, of North Cape May, passed away on March 23, 2022. Born on February 1, 1957 to the late James and Mary Twombly, he was raised in West Cape May and graduated from Lower Cape May Regional High School in 1975. Tim held a few jobs that included driving a tractor-trailer cross country and installing security systems. Prior to his retirement, he worked as a Sprinkler Fitter/Building Traders Journeyman with Local 669 UA, where he made lifelong friends whom he often spoke of. Tim was a proud and simple man with a kind heart and strong faith in the Lord. Tim was also a man of many talents. He loved the outdoors, especially fishing where he would have been everyday if he could. At one time, he even made beautiful fishing rods. He loved growing his vegetable garden and flowers and sharing his crops; tinkering around the garage where he could make something out of nothing; collecting old artifacts; beach combing with his metal detector and cheering his favorite football team, the Philadelphia Eagles! Gameday was not to be missed and the team shirt would be on! Beyond his talents and hobbies, Tim loved his family more than anything. Nothing meant more to him than spending time together or getting a phone call, especially as Parkinson’s disease began to change his life. Tim is predeceased by his two brothers, Jack Twombly and George Twombly. He will be forever loved and missed by his family which includes his two children, Timothy W. Twombly, Jr. and Kate Twombly; three grandchildren, Aleks, Shane and Paisley; siblings, Mary Snyder, Jeanette (Larry) Dalton, Jim (Bobbi) Twombly, Virginia (Ginger) Emery, Merna Alexander (Mike McCullers) and Patty Sexton (Skip Chambers); as well as many nephews, nieces, cousins and dear friends. Tim’s memorial service will take place on Saturday (April 2) at 11 am in the Cape Island Baptist Church, 115 Gurney St., Cape May. Visitation with the family will be from 10am until 11am. For those unable to attend physically, the ceremony will be livestreamed. The livestream will be accessible beginning at 10:50am by clicking this link https://www.hdezwebcast.com/show/tim-twombly Interment is private. In lieu of flowers, memorial contributions are suggested to the Cape Island Baptist Church, 115 Gurney St. Cape May, NJ 08204. (Spilker Funeral Home, Cape May) info and condolences spilkerfuneralhome.com

Livestream will be accessible on Saturday (April 2) beginning at 10:50am by clicking this link: https://www.hdezwebcast.com/show/tim-twombly