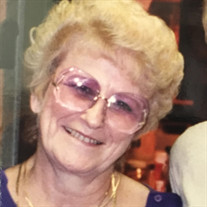 INDERLIED (nee Scheu), Teressa – 89, recently of Cape May and formerly of Clayton, passed away peacefully on June 17, 2017. Teressa was a longtime resident of Clayton where she worked as a clerk for Delsea Drugs during the 70s and 80s. She was a devoted member of St. Catherine of Siena RC Church, Clayton where she was a member of the Legion of Mary. Terry enjoyed her life, her family, her home, and her Philadelphia Phillies. She watched every game, and spoke fondly of listening to every game on the radio with her dad when she was growing up. She loved gardening in her yard - roses were her favorite. She was, and is, adored by her husband and her children and was devoted to making them happy. Her beautiful Siberian Husky, Kista was her favorite pet, and she loved her cats, Kitty, Minnie and Blackie to name a few. She had a great sense of humor and was seldom without a smile on her face, unless of course, you touched her hair, which she was very particular about. She was a favorite of many of the staff at Victoria Manor, where she resided the last two years. Terry worked hard all her life and liked it that way, painting and repainting rooms in her house and her mother's; taking her house apart for fall and spring cleanings, and hostessing summer "cook-outs" for her entire extended family. Her potato salad was the best! She is predeceased by her sisters, Marion Ellison and Monica Plantarich Kohler. Terry is dearly missed by her loving family which includes her husband of 59 years, Sherwood “Woody” Inderlied; three children, Sherwood “Woody” Inderlied, Jr., Tina (and Bill) Catanoso and Lisa (and Mark) Steinberg; one brother, John Scheu; seven grandchildren, Tara, Dominic, Ciara, Rebecca, Justin, Olivia and Mario, as well as her nieces and nephews. Mass of Christian Burial will be celebrated on Wednesday (June 28th) at 1:30pm in Our Lady Star of the Sea Church, Cape May where friends will be received from 12:30pm until 1:20pm. Interment will be private and at a later date. Memorial contributions are suggested to Teressa's favorite charity, Operationsmile.org or Operation Smile, 3641 Faculty Boulevard, Virginia Beach, VA 23453. (Spilker Funeral Home, Cape May) info and condolences: spilkerfuneralhome.com

INDERLIED (nee Scheu), Teressa &#8211; 89, recently of Cape May and formerly of Clayton, passed away peacefully on June 17, 2017. Teressa was a longtime resident of Clayton where she worked as a clerk for Delsea Drugs during the 70s and 80s.... View Obituary & Service Information

The family of Terry Inderlied created this Life Tributes page to make it easy to share your memories.