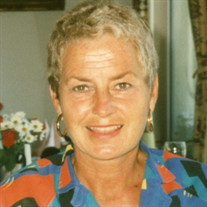 Doris Susanne (“Susie”) Tighe died peacefully on September 6, 2021 in Cape May, New Jersey. She was 88. She is survived by her three children, Kathy Tighe, Ken Tighe, and John Tighe (and spouse Polly), seven grandchildren, two great grandchildren, and her brother Ted King and his family. She is predeceased by her husbands, Edward Tighe and James Callahan, and her sister and brother-in-law, Sylvia and Ray Rydell. Susie grew up in the Fort Wayne, Indiana area. She graduated from Bluffton High School, where she was valedictorian. Susie attended Purdue University, graduating with a Bachelor of Arts in Education. She taught middle or high school English sporadically through the years in Kentucky, Ohio, and Maryland. At Purdue, she met and then later married Edward Tighe. They immediately embarked on a life of travel that took them to Kentucky and Colorado (while Ed was in the army); then to Grand Rapids and Detroit, Michigan; South Bend, Indiana; Orinda, California; Koblenz, Germany; Newark, Ohio; and Severna Park Maryland (for Ed’s job with Kaiser Aluminum). Susie embraced each location, making new friends, doing volunteer work (or teaching), and always successfully integrating herself and her family as part of the community. After the passing of Susie’s parents, who lived in Cape May, she and Ed built a vacation home across from her parents’ old house, where they enjoyed many happy times with their children and grandchildren. In the years after Ed’s death in 1995, Susie gradually spent more time in Cape May. There, she met and married James Callahan. After Jim’s death, Susie continued to live in Cape May, where she enjoyed reading and crossword puzzles, and became a huge fan of the Phillies and the Philadelphia Eagles. Susie was sustained by her Catholic faith and attended both Our Lady Star of the Sea and St. Agnes in Cape May. Susie was dearly loved and will be profoundly missed. No services are planned at this time. To leave condolences or remembrances, please visit spilkerfuneralhome.com

The family of Susie Tighe created this Life Tributes page to make it easy to share your memories.