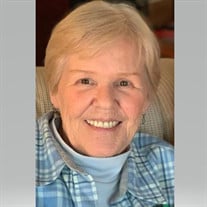 Sue “Pud” Reinhart Kelly - 73, of North Wildwood, passed away on Thursday, March 28, 2019. She was born on October 27, 1945 in Philadelphia. She graduated from Marple Newtown High School in 1963. She worked as a flight attendant for Delta Airlines. Sue was very active in her community. She served as President and Secretary of the Wildwood Civic Club, President of the Wildwood AARP Branch, Secretary & Vestry at St. Simeon's Episcopal Church, and also was given the title of “Queen of the Red Hat's Society.” She was a judge for many years of local contests such as the Baby Parade and other civic events. She is survived by her nephew, Robert Reinhart of East Greenville, PA and niece, Stephanie Stephens of Media, PA. Funeral services will be held on Saturday (April 13th) at 11am at St. Simeon's by the Sea Episcopal Church, 2502 Central Ave., North Wildwood, NJ 08260 where relatives and friends will be received from 10am until 11am. Interment will follow in Cold Spring Cemetery, Lower Twp. In lieu of flowers, memorial contributions may be made to: St. Simeon’s by the Sea or Cape May County Animal Shelter, DN 501B, 110 Shelter Road, Cape May Court House, NJ 08210. (Spilker Funeral Home, Cape May) info and condolences: spilkerfuneralhome.com

The family of Sue Kelly created this Life Tributes page to make it easy to share your memories.

Send flowers to the Kelly family.