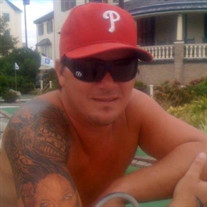 GROETSCH, Steven J. – 39, lifelong resident of Cape May, passed away on Monday afternoon, December 29, 2014. A proud Cape May Native, Steve will always have a special place in the rich fabric that is our beloved community. He attended Our Lady Star of the Sea School, Wildwood Catholic High School and graduated from Lower Cape May Regional High School in 1993. Steve was a fixture of the intersection of Beach Ave & Howard Street, where every day you could find him manning his post at Stockton Golf. He spent most of his life working for his family’s business, which also includes the Stockton Inns. It was here that Steve learned many trades and skills, but what he developed most of all was a great sense of pride in being his father’s son. Steve would never miss an opportunity to show off the exceptional work they would have done together over their years caring for the family’s beachfront property. One of Steve’s greatest passions in life was surfing. From the very first time he paddled out, there was rarely a minute that it wasn’t on his mind. It was through this passion that Steve built many of his longest and most cherished friendships. Steve’s endless search for surf took him to most every spot on the East Coast including Newport, RI for ESA Competitions, Cape Hatteras, NC for the communal Spring pilgrimage with half the town or to visit his friends in Cocoa Beach, FL during the off season. Steve also spent time travelling the California Coast, and never passed up an opportunity to go to Rincon, Puerto Rico with his friends. Even with all the places he’s been, there was no other place that he would have wanted to be than sitting off the peak at Stockton Beach with a bunch of his friends enjoying a solid swell. Steve was also known as a die-hard sports fan. There were few things in this world that meant more to him than his Eagles, Flyers and Phillies. He was a Philadelphia Eagles Season Ticket Holder and attended as many Flyers and Phillies games as he could. Steve was more than just a casual fan, but a true student of the games. From the time he was able, he would read the sports page of the local paper and later in life could always be found with that day’s copy of The Philadelphia Daily News – starting from the back page, of course. Steve had an uncanny ability to recall just about any statistic related to major sports during his lifetime and could always be relied on as a trusted source when you were trying to settle a disputed fact with a friend. A man of few words, it wasn’t always easy to get to know Steve, but you always knew where you stood with him. Some friends will tell you they had to suffer weeks of silence before he would begin to open up. However, once you were in – you were in, and it was worth it. Those he let in were blessed with no truer friendship in their lives. What will be cherished the most are the little things that made Steve so special to us. Maybe it was his warm smile and wave as you cruised by the golf shack, or a shared high five while watching a game. It may have been sitting in the lineup together during a nor’easter or toasting a frosty beverage on a warm summer evening. It will be through our collective memories and shared stories that Steve will continue to live on in all of us. He is predeceased by his grandparents, John Groetsch, Jr. and Bob & Lola Austin; and his namesake and uncle, Steven J. Groetsch. Steve is dearly missed by his loving family which includes his parents, Brian and Nancy Groetsch; brother, Brian (and Jessica) Groetsch; grandmother, Angela Groetsch; nieces, Maddie and Marla; nephew, Boden and many, many close friends. Visitation is scheduled for Monday evening (Jan. 5th) from 6pm – 9pm in the Spilker Funeral Home, 815 Washington St., Cape May and again on Tuesday morning from 10:30am – 11:30am in the funeral home with his funeral service beginning at 11:30am. Interment will follow in St. Mary’s Cemetery, Cape May. In lieu of flowers, memorial contributions are suggested in Steve’s memory to: Brendan Borek High Tides Fund, 2170 Dune Dr., Avalon, NJ 08202 or online at www.brendansfund.org - composed by Steve's brother, Brian on behalf of the Groetsch Family. -

GROETSCH, Steven J. &#8211; 39, lifelong resident of Cape May, passed away on Monday afternoon, December 29, 2014. A proud Cape May Native, Steve will always have a special place in the rich fabric that is our beloved community. He attended... View Obituary & Service Information

The family of Steve Groetsch created this Life Tributes page to make it easy to share your memories.

Send flowers to the Groetsch family.