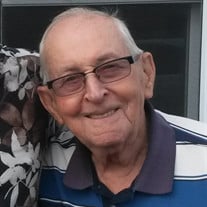 Sheftz, Stephen W. - 88, Honorary Mayor of Town Bank, passed away peacefully at home on Wednesday, December 12, 2018. Born on August 8, 1930 in Larksville, PA, Steve was the youngest of six children of Stephen J. Sheftz and Anne Fabian Sheftz. He graduated from Saint James Catholic High School for Boys in Chester, PA before enlisting in the Navy, where he proudly served during the Korean War. Sheftz then attended Pennsylvania Military College (now Widener University) earning a Bachelor of Science degree and subsequently was licensed as a Professional Engineer by the Commonwealth of Pennsylvania. Steve married the love of his life, June Barbara Slezak on August 25, 1956 at Our Lady of Peace R.C. Church in Milmont, PA and started a family fathering two children, Debbie and Stephen. Steve spent the majority of his career as an Electrical Engineer for Bell Telephone/Lucent Technologies where he served for decades advancing to supervise a four-state region. Upon retirement Steve and June moved permanently to their present home in Cape May, near their previous summer home. Sheftz was subsequently licensed by the State of New Jersey in Professional Engineering and intermittently worked for various firms. After a brief stint as Economic Director of Cape May County, Steve worked diligently and was integral in the development of bringing public water to the area before serving on the Board of the Township of Lower Municipal Utilities Authority. Affectionally known as “Mayor of Town Bank”, he was most recently known as a local historian, community leader & advocate for veterans and the residents of Lower Township, NJ/Cape May County. Beyond his professional accomplishments, Steve will best be remembered as a loving husband/father, gentleman with a kind smile, and endless source of math games and lame but charming jokes. Steve was preceded in death by his wife June and daughter Deborah and is survived by his son, Stephen, many good friends and exceptional neighbors. Steve’s life will be celebrated by a visitation on Sunday, December 16th from 4-6 pm at Spilker Funeral Home, 815 Washington Street, Cape May and a Mass of Christian Burial in the Parish of St. John Neumann at St. John of God Church located at 680 Town Bank Road in North Cape May on Monday, December 17th at 11:00 a.m. Condolences will be received at www.spilkerfuneralhome.com. Flowers may be sent directly to Spilker Funeral Home at the above address. Memorial gifts may be directed to Holy Redeemer Hospice, 1801 Route 9 North, Swainton, NJ 08210.

The family of Stephen W. Sheftz created this Life Tributes page to make it easy to share your memories.

Send flowers to the Sheftz family.