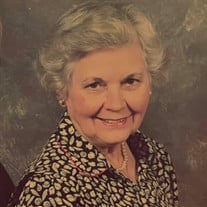 Sarah Jerome Stewart Furgiuele, 94, of Indiana, Pennsylvania passed away peacefully on March 6, 2021 with her family by her side. Sarah was born on December 25, 1926 in Claxton, Georgia, daughter of Georgia Leera Hall Stewart and Clinton L. Stewart Sr. a veteran of World War I. A Christmas baby in every way, she brought light and joy and warmth to everyone she met. Tragically, both Sarah’s father and mother passed away much too young when she was eighteen months and six years old respectively. Consequently, Sarah, her brother Clinton L. Stewart Jr and her sister Leila Sue Lynn Stewart Gilliam, were raised by their Uncle Talmage Hall and his wife Mary Belle. These early losses strengthened Sarah’s love and commitment to family and taught her to appreciate every day with the ones she loved. At age sixteen, Sarah graduated second in her class from Claxton High School. Following graduation, she moved to Atlanta to work for Southern Bell Telephone Company with her sister, but her life unexpectedly changed one fateful evening when she was introduced to Samuel Francis Furgiuele Sr who was stationed in Georgia with the United States Army. After a whirlwind courtship, the two married on February 6, 1944 just before Sam was stationed in Texas and deployed to Europe for combat in WWII. Following the war, Sam and Sarah settled in Indiana, Pennsylvania, near Sam’s family. On February 20, 1947 their daughter Diana Gail Furgiuele was born and on September 25, 1951 their son Samuel Francis Furgiuele Jr. arrived. Through the years in Indiana, Sarah worked as a longtime assistant to James G. Kelly DDS, gave countless hours to many community organizations, and was known for never forgetting to send birthday cards to friends and neighbors. She was an active member and past Regent of the Indiana County Chapter of the Daughters of the American Revolution, and was excited to have her granddaughter, Hannah Furgiuele, accepted into the DAR in 2018. She was proud of her involvement with the American Red Cross, the Legion of Mary, the IUP Women’s Club, and she was an active member of St. Thomas More parish. A committed volunteer of the church’s annual book sale, her family benefitted from her careful selections and love of books. Throughout Sarah’s life, she was surrounded by close friends, neighbors and family. She and Sam were often at the center of social events and especially loved by their closest friends who participated in the card club they helped start and continued for over 50 years with the Adamsons, Botsfords, Fiscuses, McGees, and Watchkos. Her generosity and kindness were known by all who met her. Sarah’s passion for learning was unsurpassed. An historian at heart, she was an avid reader and her research into her family genealogy was as extensive as any dissertation. She explored archives and libraries at every opportunity, carefully documenting her family’s deep roots in the South back to Scotland and England. She was always up before the sun, leaving corn and bread for the critters who routinely waited at the edge of the woods expectantly. Her grandchildren remember feeling as though they were in a Disney movie as the birds and squirrels and deer scurried about as she walked down the brick path with gifts in tow. She never let you leave her home empty handed and always had a special package carefully prepared to send you on your way with a smile. This last year presented challenges, but Sarah was an inspiration to all who knew her, and she faced the world with resilience, strength and optimism. She will be deeply missed, but will live on in her children, grandchildren and great-grandchildren every time they smile at a stranger, help a stray dog or cat, fill the bird feeder in the coldest days of winter, or share stories of the many beautiful memories and lessons learned from Sarah, aka Mom, Grammy, Grandmom, and Great Furgiuele. Sarah was preceded in death by her parents Clinton L. Stewart Sr. and Georgia Leera Hall Stewart, brother Clinton L. Stewart Sr and wife Mary, sister Leila Sue Lynn Stewart Gilliam and husband Howard, her uncle and aunt Talmage and Mary Belle Hall; and husband of 73 years Samuel Francis Furgiuele Sr. She is survived by her daughter Diana Furgiuele Cutshall and husband Jim of Cape May, New Jersey; son Samuel Francis Furgiuele, Jr and wife Peggy of Boone, North Carolina; eleven grandchildren: Ben and Jen Waldie, Rachel and Larry Akst, Katie and Chris Reid, Nicholas and Julia Furgiuele, Peter and Anna Barattin Furgiuele and Hannah Furgiuele; seven great-grandchildren: Lizzie, Maddie and Lillie Waldie, Caleb and Safi Reid, Francis Furgiuele and Martino Furgiuele; her sister-in-law, Phyllis Gaston; and her dear neighbors who she counted as family, Tony Churner, his wife Pam, and their children Scottie, Lucy and Joey. Sarah’s viewing and funeral ceremony will take place in the Spilker Funeral Home, Cape May and will be available via livestream. The livestream will be active on Friday (March 12th) at 1:45pm for Sarah’s viewing and her funeral ceremony will follow and begin at 2pm. Simply click on this link at the advertised time https://client.tribucast.com/tcid/55235271 Interment will take place in Arlington National Cemetery, Arlington, VA. In lieu of flowers, memorial contributions may be made to the Indiana County Chapter of the Daughters of the American Revolution or to the no-kill shelter, Four Footed Friends, 220 Beck Road, Indiana, PA 15701.

Sarah Jerome Stewart Furgiuele, 94, of Indiana, Pennsylvania passed away peacefully on March 6, 2021 with her family by her side. Sarah was born on December 25, 1926 in Claxton, Georgia, daughter of Georgia Leera Hall Stewart and Clinton L.... View Obituary & Service Information

The family of Sarah Furgiuele created this Life Tributes page to make it easy to share your memories.