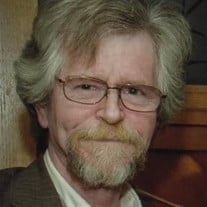 BAKER, Roy M. - 67, of the Cape May area, passed away on August 7, 2019, surrounded by his family after a brief but fierce battle with metastatic lung cancer. Roy was born in his paternal family’s home state of West Virginia, to Roy Baker, a traveling salesman, and Doris Baker (nee Taylor), a registered nurse and Cape May native. Roy spent most of his life in Cape May, growing up with his mother, sister, and extended family of grandmothers, aunts, uncles and cousins in a farm family deeply rooted in the area. Roy was a caring person who valued others, most of all his family. He was a talented musician with a genuine love of music, and a great reader who loved a good discussion or debate. Roy was a craftsman who took great pride in his work throughout his life. He was generous and always gave others the benefit of the doubt. He maintained his positive outlook on life until the very end, which will surprise no one who knew him well. He was predeceased by his mother, Doris, who died of cancer on August 6, 1992, his father, who passed away in TN after a long illness, and his younger sister, Carolyn Twombly, who passed away in 2012 after a long illness. He leaves behind his loving wife, Donna (nee Olson), daughter Shannon Nagle, son-in-law Chris Nagle, two deeply beloved granddaughters, as well as, nieces, nephews, cousins and extended family. Roy’s memorial ceremony will be announced at a later date. In lieu of flowers, memorial contributions can be made to Holy Redeemer Home Care & Hospice or the charity of your choice. (Spilker Funeral Home, Cape May) info and condolences: spilkerfuneralhome.com

BAKER, Roy M. - 67, of the Cape May area, passed away on August 7, 2019, surrounded by his family after a brief but fierce battle with metastatic lung cancer. Roy was born in his paternal family&#8217;s home state of West Virginia, to Roy Baker,... View Obituary & Service Information

The family of Roy Baker created this Life Tributes page to make it easy to share your memories.