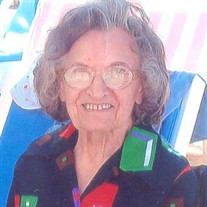 ALTOBELLI (nee Svitana), Rose A. – 89, of Cape May passed away peacefully on December 9, 2017. She was the daughter of Slovakian immigrants, born and raised in Bedford County, PA and moved to NJ after her marriage to her childhood sweetheart, Herman. Thereafter, the couple started their lives together in Elizabeth, NJ, then moved to Plainfield; later Fanwood, until their ultimate move to Cape May in 1986 where they enjoyed living right from the start. They quickly became involved in their church, Our Lady Star of the Sea, where Rose was a member of the Altar and Rosary Society. A woman of great faith, she was always actively involved with the Catholic Church from her early retreats at the Weston Priory, Weston, VT; to her weekly prayer group meetings at Mt. St. Mary’s Academy in Watchung, NJ and to a missionary retreat in Venezuela. Rose and Herman recently celebrated their 69th Wedding Anniversary this past June. She was predeceased by her husband, Herman earlier this year and is also predeceased by her sisters, Annie, Susan and Mary and her brother’s John and Jacob. Rose is dearly missed by her loving family which includes her three children, Louis (and Jane) Altobelli, Andrew (and Susan) Altobelli and Lisa (and Len) Hehir; six grandchildren, Louis (and Kim), Andrew (and Heather), Jennifer (and Philip), Matthew (and Christina), Maura, and Michael; twelve great grandchildren, Nicoletta, Andrew Jr., Sofia, Tyler, Dominic, Camille, Xavier, Cecily, Vienna, Mario, Anthony, and Kimber; brother, Paul Svitana as well as many nieces and nephews. Relatives and friends will be received on Thursday (Dec. 14th) from 12:30pm until 1:20pm in Our Lady Star of the Sea Church, 525 Washington St., Cape May where Rose’s Mass of Christian Burial will be celebrated at 1:30pm. Interment will follow in St. Mary’s Cemetery, Cape May. Memorial contributions are suggested to Our Lady Star of the Sea Church by visiting “In Memory Of” online at www.inmemoryof-memorial.org/rose-altobelli or if you prefer regular mail, mail to: In Memory Of, PO Box 5472, Charlottesville VA 22905.

ALTOBELLI (nee Svitana), Rose A. &#8211; 89, of Cape May passed away peacefully on December 9, 2017. She was the daughter of Slovakian immigrants, born and raised in Bedford County, PA and moved to NJ after her marriage to her childhood sweetheart,... View Obituary & Service Information

The family of Rose Altobelli created this Life Tributes page to make it easy to share your memories.