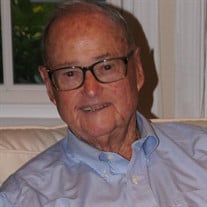 EWALD, Robert H. - of Cape May and formerly of Hatboro, PA, died peacefully with his family in Cape May on Monday, April 15, 2019. Bob was 93. Preceded by Jean, his loving wife of 63 years, Bob leaves behind a proud and loving family that now stretches across the country and across three generations. Bob was the youngest son of German immigrants, Julius and Ida Ewald. After his father's death, Bob was raised in Philadelphia by his mother and older brother Ernie and grew up to be a life-long fan of the Phillies and later the Eagles. Bob served his country in WWII from 1943 - 45 in the Atlantic as a Signalman on two LSTs. After the War, he graduated from West Chester University in 1949 and began a 34-year teaching career at FDR Middle School in Bristol Township. Never satisfied taking the summer off, Bob spent his first summers as a camp counselor in Kennebec, North Belgrade ME and then, turning his attention to his growing family, Bob often spent his days chasing after kids and renovating several homes in Hatboro and Cape May. To put his five children through college, he also spent evenings tending bar at the Highland Inn in Abington, PA and at many of the well know restaurants in Cape May (C-View, Lobster House, Shore Bar and Merion Inn) where he came to know, and be known, by many. In retirement, Bob split his time between Cape May and Naples, FL and became an avid golfer. He enjoyed many a morning walking the links at Avalon CC, Cape May National, and Quail Run in Naples. In between rounds, Bob also enjoyed traveling with Jean to points near and far to spend time with family and friends. Of course, no matter where he was or what he was doing, Bob always managed to find time to share a cocktail at 5:00 and raise a glass to a life well lived. Bob was a loving father to Christine (and Bob) McCallion, Susanne Warden, Barbara (and Clarke) Bashelor, Robert Ewald (and wife, Clare Doherty) and Peter (and Veronica) Ewald, and a beloved Pop-Pop to 15 grandchildren and 9 great-grandchildren. A Memorial Mass will be held on Friday, May 3, at 1:30 PM in Our Lady Star of the Sea Roman Catholic Church, 525 Washington St., Cape May. Guests can visit with the family and pay respects beginning at 12:30. In lieu of flowers, donations are suggested to: Our Lady Star of the Sea Parish, Cape May, NJ.

EWALD, Robert H. - of Cape May and formerly of Hatboro, PA, died peacefully with his family in Cape May on Monday, April 15, 2019. Bob was 93. Preceded by Jean, his loving wife of 63 years, Bob leaves behind a proud and loving family that now... View Obituary & Service Information

The family of Robert Ewald created this Life Tributes page to make it easy to share your memories.

EWALD, Robert H. - of Cape May and formerly of Hatboro, PA, died...