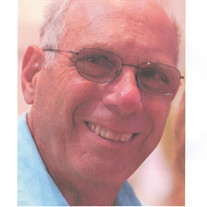 NICK, Richard James - 70, of Cape May NJ and formally of Boonton Township, NJ, peacefully passed away, surrounded by his family on August, 14, 2014 at North Cape Center, North Cape May NJ following a courageous two year battle with pancreatic cancer. Richard was born on September 23, 1943 in Copiague, NY to the late Samuel and Tiney (nee Baker) Nick. Richard received his Bachelor of Science from Upsala College and his Masters of Business Administration from Seton Hall University. He was a Certified Public Accountant, who worked for Arthur Young and Company, SCM Corporation (Director – Corporate Finance), Baltimore Spice (VP Finance and Administration) and D. George Harris and Associates (Managing Director). During his employment he was lucky enough to travel the world (North America, South America, Europe, Asia and Australia) and see sites many of us can only dream of seeing. He was also a charter member and Treasurer of the Boonton Township Historical Society. Richard enjoyed the outdoors which was evident by his love of biking and boating. In June of 1981, Richard and two of his friends rode from High Point NJ to Cape May NJ in one day, which was a total of 201 miles and took them 15 hours and 12 minutes. While we know the miles of that trip, no one knows the exact mileage he logged throughout his life but we do know that for many years you could find him on the roads in Morris and Cape May Counties, NJ each and every Sunday. He even involved Carol in his love of biking; the two of them began riding a tandem bike. They took their tandem to places such as San Juan Island, New Foundland, Nova Scotia, Maine, Vermont, the North Carolina Outer Banks and of course, New Jersey. Richard and Carol were able to enjoy his love of boating by completing a year-long Great Loop journey. The Great Loop is the continuous waterway that encompasses the eastern portion of North America including the Atlantic and Gulf Intracoastal Waterways, the Great Lakes, the Canadian Heritage Canals, the Mississippi and the Inland Rivers of America's heartland. During this trip, he and Carol made friends with many couples who are scattered throughout the United States and Canada. It was during this trip that Richard was diagnosed with cancer. He never let the disease stop him. As he was going through chemotherapy, he and Carol were able to complete this once in a lifetime adventure. If you are interested in reading more about this adventure, please read his blog at http://www.saltnsandsgreatadventure.blogspot.com. Richard also had a love for Mini Coopers. He purchased a Mini by Goodwood in January of 2013. After this purchase, he and Carol immersed themselves into the Mini lifestyle. He joined the Philly Mini Club and participated in many of their club rides. They completed the “Mini on the Dragon”, which is a rally to drive an 11-mile stretch of road with 318 curves through the breath taking mountains of North Carolina. He also had plans to complete the “Minis take the States 2014” ride, which is an epic adventure across 18 states and 15 cities. The ride started from the San Francisco Bay on July 26th and continued to Boston's Back Bays arriving on August 9th. Unfortunately, his illness made it impossible for him to participate in this event. Richard had a love of life and never sat still as is evident by some of his activities referenced above. As he said immediately after being diagnosed; “Remember life is a journey, we are lucky to travel. The difference between an Adventure and an Ordeal is Attitude-------make sure yours is positive.” His positive attitude and will helped him survive two years with this horrible disease. Richard will be dearly missed by his loving wife of 48 years, Carol Edna (nee Hulbert) Nick, his daughters Cynthia Lynne (nee Nick) Lindauer (Matthew Lindauer) and Sandra Ann Nick (Patrick Gein), his grandson Keegan Chase Gein and his sister Barbara Ann (nee Nick) Farner and her family. Immediate services are private, a celebration of Richard’s life is being planned for September, future information will be available on the Spilker Funeral Home website spilkerfuneralhome.com. In lieu of flowers, memorial donations, to help fight and ultimately find a cure for pancreatic cancer, may be made to, and checks payable to: "Trustees of Columbia University" and mail to: Columbia University Medical Center Office of Development Attn: Marilyn Hernandez 100 Haven Avenue, Suite 29D New York, NY 10032 **Please be sure to indicate “In memory of Richard J. Nick/Pancreatic Cancer Fund” in the memo portion of your check. Many thanks from the Family of Richard Nick.

The family of Richard James Nick created this Life Tributes page to make it easy to share your memories.

NICK, Richard James - 70, of Cape May NJ and formally of Boonton...

Send flowers to the Nick family.