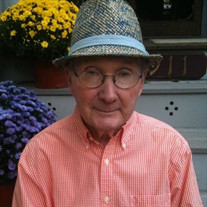 LORANGER, RICHARD E. “DICK” – 83, of Cape May, NJ, passed away peacefully on Monday, January 16, 2017 in the comfort of his home with his family at his side. Born in Darby, PA, Dick lived in Aldan, PA and graduated from Lansdowne HS (1951); later graduated from the Pennsylvania Military College (1960) where he earned his Bachelor’s Degree in Economics. A man of honor, he served in the United States Army during the Korean War. He worked for Unisys (formerly Burroughs Corp.) for 27 years and retired as an International Human Resources Director. He has been a resident of Cape May for the past 30 years. Dick was a devoted family man, giving his all for his wife and children, and taking great pride in them. Whether it was a sports event, grade school science fair, scholastic awards dinner, photo exhibition, or poetry reading, he was there to cheer them on. His support continued throughout the years – always being there for each of them. During Dick’s business travels, he ventured to many places including South America, Australia and New Zealand, Hong Kong, England and Scotland. In his retirement years, he discovered cruising and along with his wife, Pat, and close friends cruised to many nice spots. He also enjoyed visiting his children as they moved around the country, in Brooklyn, San Francisco, San Diego, and Chicago. While growing up, Dick played football in junior high and high school, and ran track, participating in the Penn Relays at Franklin Field. His athletic ability led him to coaching Pop Warner football, little league baseball, ice hockey, and basketball. His love of football started at a young age when his father, who worked on the communications systems at Franklin Field, took him to the press box each week to watch Penn and Eagles games. Everyone who knew Dick, knew his team was “Michigan”! This passion started after the family moved from Brookhaven, PA to Plymouth, MI in 1972. He loved the University of Michigan Wolverine football team and continued to do so the next forty five years. He was always seen walking in Cape May in his U of M sweatshirts and hats… He was also a lifelong lover of jazz, catching the beat at an early age from his older sister’s music background. As a young man, he played saxophone in a band that appeared on the Paul Whiteman TV Teen Club in Philadelphia, winning first prize for the evening. He found great joy and solace over the years in listening to be-bop, swing, big band, and 50’s rock, both live and recorded, even into his final days. Along with everything else, he was a man with a heart made of jazz. Dick loved the beach and spent many days down the shore. During fifteen years in Michigan, he took his family every summer to vacation in New Jersey. Each July, he would pack up the family station wagon and drive twelve hours to Wildwood Crest. It was no coincidence that Dick’s final years were spent in Cape May walking the beachfront and enjoying the nice ocean breeze. He is predeceased by his parents, Regis and Edna Loranger (nee Roberts) and his sister, Virginia Shermer. Dick is dearly missed by his loving family which includes his wife of 57 years, Pat (nee Leigh); four children, Richard Loranger, Geoffrey Loranger, Suzanne Bleck (Robert) and Leigh Loranger (Jeff Schroeter); two granddaughters, Kathryn and Emily Bleck; and his two sisters, Roberta Morrison and Carol Larkin. Relatives and friends will be received on Sunday (Jan. 22nd) from 11am to 12:30pm in the Spilker Funeral Home, 815 Washington St., Cape May, where funeral services will begin at 12:30pm. Interment will take place the following day, Monday (Jan. 23rd) at 1pm at Ss. Peter and Paul Cemetery, Springfield, PA. In lieu of flowers, memorial contributions are suggested to: Michael J. Fox Foundation for Parkinson’s Research, online at www.michaeljfox.org Although this website offers many options to send flowers, PLEASE observe the request of the family to send a memorial contribution instead to: Michael J. Fox Foundation for Parkinson’s Research, online at www.michaeljfox.org

The family of Richard E. Loranger created this Life Tributes page to make it easy to share your memories.

Send flowers to the Loranger family.