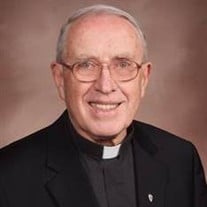 RYAN, Rev. Msgr. Timothy – 88, Catholic Priest - Diocese of Camden, formerly of Cape May and recently of Cherry Hill passed away on February 22, 2020 at St. Mary’s Center, Cherry Hill, New Jersey. Born in Killarney, Ireland, County Kerry on February 7, 1932 to the late Timothy Ryan and the late Catherine (Teahan) Ryan, Monsignor Ryan was one of ten children and is predeceased by seven siblings. He is survived by his sister, Hanora Campbell of Yorktown, Virginia, his brother, Jeremiah Ryan of Chazy, New York, and forty nieces and nephews. He graduated from St. Brendan’s Seminary in Killarney, Ireland; later graduated from St. Peter’s College in Wexford, Ireland and was ordained a priest on June 7, 1957. He was first assigned to St. Ann’s Parish, Wildwood (1957-1964); he was later assigned to St. James Parish, Pennsgrove-Carney’s Point where he became Pastor in 1967; from 1973-1981 he was the founding Pastor of Saints Peter and Paul Parish, Turnersville; from 1981-1992 he was the Pastor of St. Mary’s Parish, Williamstown; from 1992 until retiring in 2004 he was the Pastor of Our Lady Star of the Sea Parish, Cape May; from 2005-2017 he was in residence at St. John of God Church, N. Cape May where he served in active ministry until 2016 before moving to St. Mary’s Center, Cherry Hill in 2017. “Well done good and faithful servant.” Monsignor Ryan was a gentle, reverent man of God, with a special devotion to Our Lady and to the Divine Mercy. He cherished his family and was an exemplary role model to all. He loved Irish music and playing the accordion. He also enjoyed gardening and was a passionate fan of Irish football. Monsignor Ryan will be dearly missed by his loving family, which includes his siblings, and his many nieces, nephews, cousins and life-long friends. Viewing Saturday, February 29th from 10:00am until 11:45am in St. John of God Church (Parish of St. John Neumann), 680 Town Bank Rd., N. Cape May where Mass of Christian Burial will follow and begin at noon, with the Most Reverend Dennis J. Sullivan, D.D., Bishop of Camden, Principal Celebrant. Interment will follow in St. Mary’s Cemetery, Cape May. In lieu of flowers, memorial contributions are suggested to St John of God Pro-Life Group. (Spilker Funeral Home, Cape May) info and condolences: spilkerfuneralhome.com

The family of Rev. Msgr. Timothy Ryan created this Life Tributes page to make it easy to share your memories.