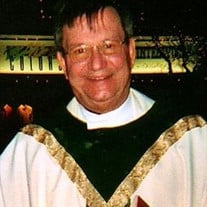 McIntyre, Rev. Msgr. Thomas J., age 77, of Glassboro, NJ, passed away peacefully at home with his family by his side on Dec. 6, 2019. Born in Camden, NJ to the late James P. and Catherine (Goldthorp) McIntyre, he is the beloved brother of Jeanette Reilly of Glassboro and the late Rev. Msgr. James P. McIntyre. Devoted uncle of Janice (Tony) Lanteigne, Richard (Jodi) Winters, Christopher (Tara) Reilly, Kevin Reilly, Maureen (Mike) Collazo, Donna (Brendan) Shaw. Uncle to 14 great-nieces and nephews. Raised in Westville, Msgr. McIntyre graduated from Gloucester Catholic HS, Mount St. Mary’s College in Emmitsburg, MD and Gregorian University, Rome, Italy. Ordained at St. Peter’s Basilica, in Rome, Italy on December 17, 1966, he later received his Master’s Degree in Secondary Education Administration from Villanova University. Msgr. was a faithful leader in the Camden Diocese for many years having served as Vocation Coordinator at St. Joseph HS in Hammonton beginning in 1970 and later Administrative Assistant at Sacred Heart HS, Vineland in 1975. In 1976 he became Principal of Gloucester Catholic HS and in 1982 was named Superintendent of Schools after briefly serving as Assoc. Superintendent earlier that year. In 1991 he became Vicar for Pastoral Services for the Diocese and in 1999 was made Episcopal Vicar for Catholic Schools. He also served on the Continuing Education & Spiritual Formation of Priests, Priests Council, Priest Personnel Board, Inter-parochial Board, College of Consulters and Presbyteral Council Msgr. McIntyre also served as Executive Editor of the Catholic Star Herald in the 1980’s and was well known for his “Teachable Moments” column where his many inspirational writings will forever be cherished. He touched the lives of many during his pastoral ministry where he served as Pastor of St. Jude Parish in Blackwood 1992-2000, St. Peter Celestine, Cherry Hill 2000-2004 and Our Lady Star of the Sea, Cape May from 2004 to 2010 at which time he retired after suffering a head injury after a fall on the ice. He continued to demonstrate immense courage after his accident and devoted himself to the prayerful support of others while in the care of his sister in her home. Msgr. McIntyre was an amazing and humble man. His love for Christ, his family, his parishioners, and friends was always evident in his words and actions. He was an avid Eagles and Phillies Fan. Visitation Friday, Dec. 13, 2019 from 9-10:45 am, Incarnation RC Church, 240 Main St., Mantua. Mass of Christian Burial, 11 am, Most Reverend Dennis J. Sullivan, D.D., Bishop of Camden, principal Celebrant. Burial beside his beloved parents and brother in New St. Mary’s Cemetery, Bellmawr. In lieu of flowers, contributions may be offered to the Msgr. Thomas J. McIntyre Memorial Scholarship Fund for Gloucester Catholic HS, c/o Jeanette Reilly, 14 Ealey Ct., Glassboro, NJ 08028. (Spilker Funeral Home, Cape May) info and condolences: www.spilkerfuneralhome.com

McIntyre, Rev. Msgr. Thomas J., age 77, of Glassboro, NJ, passed away peacefully at home with his family by his side on Dec. 6, 2019. Born in Camden, NJ to the late James P. and Catherine (Goldthorp) McIntyre, he is the beloved brother of Jeanette... View Obituary & Service Information

The family of Rev. Msgr. Thomas J. McIntyre created this Life Tributes page to make it easy to share your memories.