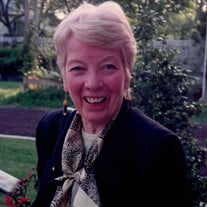 Rev. M. Jo Tolley, resident of Cape May since 1993, died here on Saturday, June 15, just one week shy of her 94th birthday. Born June 21, 1925 in Wilcox, Nebraska as the elder of two daughters of farmers Jotham and Elizabeth (nee Abraham) Blackburn, Jo had an infectious passion for life, God, family, friends, music, cooking, gardening, and justice. Jo and her family survived the dust bowl on their farm in Nebraska. She taught herself piano as a teen, mastering popular songs, boogie-woogie, Bach, and Rachmaninoff. She graduated from Iowa State University with a B.S., where she met the love of her life, the late Rev. William G. Tolley (1926–2001). Jo and Bill were married in 1946 and began their adventure of love and service that took them first to Fort Wayne, Indiana, and after Bill sensed a call to ministry, to Princeton for seminary and then on to serve Presbyterian Church (USA) congregations in Atlantic Highlands and Yonkers, where, despite opposition, the Tolleys led a group of parishioners to participate in the historic 1963 March on Washington. Their final call was to Union Church of Bay Ridge, Brooklyn, where Jo sensed her own call to ministry, graduating with her M.Div. from Union Theological Seminary in 1983. The Tolleys were appointed as co-pastors by Union Church, becoming the first clergy couple in the Presbytery of New York City. They received honors for their service from New York City Mayor Ed Koch and President Ronald Reagan. Besides sharing ministerial duties with Bill, Jo distinguished herself as the co-founder of the Union Center for Women and leader of various peace and justice initiatives, including the call for nuclear disarmament. After retiring in Cape May in 1993, Jo continued her volunteer activities, leading groups at church and in the broader community. She was a vocal member of the Cape May Elementary School Board. She never flinched from speaking truth to power and was a fierce advocate for women, minorities, and the poor. She had a unique gift for making everyone feel special. Jo was pre-deceased by her husband Bill (2001), sister Beverlee Burnet (2002), and grandson Ned Tolley Gibbons (1994), and is survived by her daughters, Joyce Tolley, Kim Gibbons, Carol (and Thomas) Hastings, and Cindy Tolley; grandchildren, Phoebe Weiskopf, Rose (and John) Keith, Fern Gibbons (and Nathaniel Green), Paul Hastings (and Debbie Wissel), Leighann Scheff, Nicole Weiskopf (and Lev Blumenstein), Sarah (and Matt Churchill), Jeremy Scheff, Cody Gibbons, and Katie Hastings; and great-grandchildren, Ezekiel Green Gibbons, Liam Wissel Hastings, Grace Churchill, Helen Blumenstein, Bill Keith, Emi Churchill, Grayson Wissel Hastings, Eliana Green Gibbons, Leo Blumenstein, Danny Keith, Isaiah Green Gibbons, Tommy Churchill, and Ruby Keith. Viewing hours will be on Friday (June 21st) from 6pm until 8pm in the Spilker Funeral Home, 815 Washington St., Cape May and again on Saturday morning from 10am until 10:30am in the First Presbyterian Church of Cape May, 500 Hughes St., Cape May where Jo’s funeral ceremony will follow and begin at 11am. Interment will take place at a later date in Cold Spring Presbyterian Cemetery. In lieu of flowers, please make a donation to the charity of your choice. Info and condolences: spilkerfuneralhome.com

The family of Rev. Jo Tolley created this Life Tributes page to make it easy to share your memories.