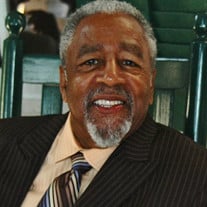 FUNERAL LOCATION CHANGE DAVIS, Rev. Robert O. &#8211; 90, of Cape May. The location of the funeral for Rev. Davis has been moved to Cape May Convention Hall, 714 Beach Ave., Cape May where visitation will be held on Saturday (Jan. 9th) from... View Obituary & Service Information

The family of Rev. Bob Davis created this Life Tributes page to make it easy to share your memories.

Send flowers to the Davis family.