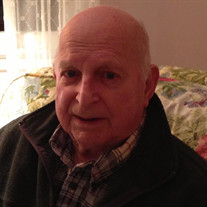 KUSTRA, Peter – 89, recently of Cape May and formerly of Philadelphia passed away peacefully on Thursday, April 21, 2016. Born in Mahonoy, PA, Peter was a longtime resident of the Philadelphia area before moving to Cape May four years ago to be closer to his daughter. Peter graduated from Mahonoy City High School in 1944. After high school, Peter, a true man of honor, served in the United States Army Air Corps in the Philippines during World War II as an air operations specialist. It should be remembered that Peter had tried to enlist twice for the war but was turned down due to blind vision in his left eye. However, he persevered, wore the recruitment specialist down, and the third time was the charm. He was awarded the WWII Victory Medal and Army of Occupation Medal upon his discharge in 1947. After returning home from the war, Peter began a 30 plus year career as a lathe operator for the FMC Corporation, formerly the Link Belt Corporation in Philadelphia. Though a machinist by trade, he possessed a hidden artistic flair and was very proud of having produced steel dumbbell weight sets and two male steel signet rings with his massive lathe. Peter was a man of strong character with a wily sense of humor. He often told the story that he had been the only male in his typing/steno class in his senior year in high school and this had merited him the honor of being the chief typist on base while in the Philippines during the war. As a father, he was always unfailingly present for his two children when they needed him most. He personified hard working values as the norm and always urged persons to never be afraid to say the truth – as long as it was the truth. Peter was generous to his co-workers always lending money to those who truly needed it to survive. As to his axioms for a healthy life, he always said: “think positive”, “relax and take it easy” and to “have a good day but not just one, but many good days.” He is predeceased by his wife, Genevieve (nee Witanek); his brothers, John and Michael; and sisters, Anna, Mary, Eva, and Julia. Peter is dearly missed by his family which includes his daughter, Sharon Lee Kustra and her husband, Mark LeMunyon; son, Michael Kustra and his wife, Rani; grandson, Mark Robert LeMunyon; and his surviving siblings, Joseph, Helen, Mildred, and Nancy. A graveside memorial ceremony will take place privately for family and friends.

KUSTRA, Peter &#8211; 89, recently of Cape May and formerly of Philadelphia passed away peacefully on Thursday, April 21, 2016. Born in Mahonoy, PA, Peter was a longtime resident of the Philadelphia area before moving to Cape May four years... View Obituary & Service Information

The family of Peter Kustra created this Life Tributes page to make it easy to share your memories.

KUSTRA, Peter – 89, recently of Cape May and formerly of Philadelphia...

Send flowers to the Kustra family.