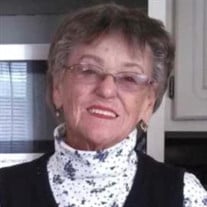 BROWN, Paula Mae (nee Schellenger) – 93, native of Cape May, passed away peacefully at home with her family at her bedside on September 14, 2020. Daughter, Sister, Wife, Mother, Aunt, Grandmother, Great-Grandmother, she lived a full and happy life. A true Cape May native, she attended Cape May Elementary and Cape May High School, graduating in 1944. She met the love of her life, John C. “Jack” Brown when he was a lifeguard on the Cape May Beaches. Beautiful young woman and handsome young lifeguard…married for 56 years. She and her husband owned John C. Brown Plumbing and Heating and were partners with their dear friends the Hobers in the ownership of the Mt. Vernon Motel on Beach Drive in Cape May. In true native Cape May Style, she and her children and grandchildren, Jennifer and Chuck “Bump” were blessed to spend every day on the then beautiful Cape May beaches, sitting in their semi-circle with her dearest friend Marie Morris. But being a good, caring wife, she made sure to have lunch ready for her husband and his assistant Jim Holland, who, because he was like a son to them, we called “Howie.” After retiring they enjoyed years of travel and days of golf. Paula was a great golfer, a gift shared by her son Jack, and won many awards including Club Champion at Avalon Golf Club and first place at Cape May National. After her husband passed, she did more traveling with Marie Morris and started painting. She was an accomplished painter and won numerous awards, including many Best in Show. Mrs. Brown was predeceased by her mother and father, Julia and Bart Schellenger; her stepfather, George Johnson; her sister and brother-in-law, Marguerite and Albie Lundholm; her much loved husband, John “Jack” C. Brown; her sons, Paul Albert Brown and James C. Brown, Sr.; and her great-grandbabies, Zoe Brown and Sophia Brown. Those left to treasure her memory are her son, John C. Brown and his beloved wife Anne; her daughter, Linda Brown Parson; her “one-in-a-million” son-in-law, Joseph M. Parson; her grandchildren, Jennifer L. Matthews and her partner, Andrew Steiner, Charles J. Matthews, Sr. and his wonderful wife Samantha, James C. Brown, Jr. and his wife Rebecca, Jacqueline C. Wilson, and Jason C. Brown; her great-grandchildren, Charlie Matthews, Benjamin Matthews, Savannah Brown, Ambrose Brown, David Brown, and Kyle Brown; her nephew, Paul B. Lundholm and her “favorite” niece, Jane Lundholm Brown. Paula lived a full life filled with family and friends and made a difference to all who knew and loved her. And remember “MAM”, Charlie “Has Your Back”. Rest Well. Good night. Funeral services are being held privately. Info at spilkerfuneralhome.com Condolences may be mailed to 44 Route 47 South, Cape May Court House NJ 08210.

BROWN, Paula Mae (nee Schellenger) &#8211; 93, native of Cape May, passed away peacefully at home with her family at her bedside on September 14, 2020. Daughter, Sister, Wife, Mother, Aunt, Grandmother, Great-Grandmother, she lived a full and... View Obituary & Service Information

The family of Paula M. Brown created this Life Tributes page to make it easy to share your memories.