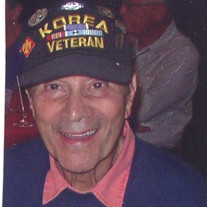 SBARRA, Patrick R. - 86, of Cape May Point, NJ, passed away peacefully, surrounded by his family, on February 20, 2015 at the Cape May Court House Center. Formerly of Hartsdale, NY, Patrick was born on Staten Island to Cosmo and Maria Sbarra. He earned his MBA at Wagner College, Staten Island. A proud American and Army Veteran, he served as a Staff Sergeant with the 45th Division in the Korean War. He was a paratrooper/ranger and combat medic and a recipient of the Purple Heart. He became a member of the Staten Island Korean War Veterans Association, the Cape May VFW Post 386 and the American Legion Post 193. Following his service in the army, he began a long career in the packaging and HVAC industries. In 1975 he launched his own company, Ellie Sales, which represented heating and air conditioning companies throughout the northeast. Patrick was also a pioneer in the solar energy movement. An active community servant, he was Treasurer of the Cape May Point Volunteer Fire Company #1, Vice President of the Cape May Point Taxpayers Association, and a Deacon of the First Presbyterian Church of Cape May where he served as Chairman of Building and Grounds and a member of the Pastor Search Committee. He was a member of the Cape May Kiwanis Club and assisted in a variety of worthwhile causes in the Cape May community. Patrick enjoyed concerts and plays, astronomy, photography, history, walking and biking, and taking care of his grandchildren. He was an avid traveller and visited countries throughout the world. He is predeceased by his sister, Marie Yaccarino. He will be missed by his loving family which includes his wife, Jane (nee Plunkett); his son Patrick and wife Susan and his granddaughters Kate and Allie; his daughter, Alexis Sbarra; his step children John and Suzanne Greenawalt and their sons John and Drew; David Greenawalt; Jack and Kate Wightman and their sons Kyle, Dylan and Aidan; his brother Robert Sbarra; and many cousins, neices and nephews. Patrick’s memorial service will begin at 11am on Saturday (March 7th) at the Cape May Presbyterian Church, 500 Hughes St., Cape May where friends will be received from 10:30am – 11am. Patrick’s interment with military honors will take place prior to his visitation and memorial ceremony on this same day at 9:30am in the Cape May County Veterans Cem., Cape May Ct. House. In lieu of flowers, memorial donations are suggested to the First Presbyterian Church of Cape May, 500 Hughes St., Cape May, NJ 08204. (Spilker Funeral Home, Cape May) info and condolences: spilkerfuneralhome.com -

SBARRA, Patrick R. - 86, of Cape May Point, NJ, passed away peacefully, surrounded by his family, on February 20, 2015 at the Cape May Court House Center. Formerly of Hartsdale, NY, Patrick was born on Staten Island to Cosmo and Maria Sbarra.... View Obituary & Service Information

The family of Patrick Sbarra created this Life Tributes page to make it easy to share your memories.

Send flowers to the Sbarra family.