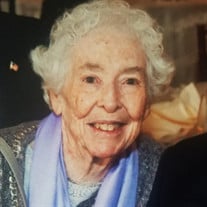 RONEY (nee Stanton), Patricia A. “Pat” – of West Cape May, passed away on her 90th Birthday, February 10, 2019. A longtime resident of Philadelphia, Pat and her late husband, Jim, summered in West Cape May since 1973 before moving here permanently in 1988. She graduated from West Philadelphia Catholic Girls High School in 1948. Pat worked for many years in Philadelphia as a crossing guard, a career that suited her perfectly, as she thoroughly enjoyed interacting with all the children she came in contact with on a daily basis. She was devoted to her Catholic faith and was an active member of Our Lady Star of the Sea Church in Cape May and the Christ Child Society. She was also a member of the Women’s Community Club of Cape May. Pat was a kind and loving woman with a terrific sense of humor who loved spending time with friends and family. She was a big fan of British mysteries on PBS and often identified the culprit before the detective. Pat was a strong and independent woman who continued to live on her own after Jim’s death. She welcomed daily phone calls from family except during Jeopardy and Wheel of Fortune. She is predeceased by her husband, James F. “Jim” Roney (2018); son, John Roney; grandson, Billy Schmidt; brother, Joseph Stanton and her sister, Eileen Hawthorne. Pat is dearly missed by her loving family which includes her children, James (Marianne) Roney, Charles (Andrea) Roney, Marie Schmidt (Richard Paul) and Joseph Roney; brother, Michael (Patricia) Keller; 12 grandchildren; 16 great grandchildren; brother-in-law, Fred Ostermann; sister-in-law, Anne Rooney; as well as, nieces, nephews and cousins. Mass of Christian Burial will be celebrated on Saturday (Feb. 16th) at 11am in Our Lady Star of the Sea Church, 525 Washington St., Cape May where there will be a viewing from 10am until 10:50am. Interment will follow in the Cape May County Veterans Cemetery. In lieu of flowers, memorial contributions are suggested to: Love of Linda Cancer Fund, PO Box 1053 Wildwood, NJ 08260 / online: www.loveoflinda.org

The family of Pat Roney created this Life Tributes page to make it easy to share your memories.

Send flowers to the Roney family.