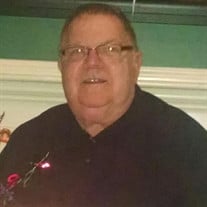 GALLACCIO, Nicholas William - 71, of Cape May, passed away peacefully surrounded by his family at Cape Regional Medical Center on April 27, 2016. Nicholas was a graduate of Wildwood Catholic High School, Class of 1962. After 27 years of service, he retired from the City of Cape May Police Department as a Sergeant and former K-9 handler. During his career, he was the Range Master for the Cape May County Police Academy and continued in this role after his retirement. Nick enjoyed spending his time with friends and family fishing, golfing, and hunting. He was an avid sports fan, who spent many years coaching his sons along with local children in Little League. Recently, he has enjoyed watching his grandson play baseball as well as spending time with his four grandpuppies. He is preceded in death by his brother, Peter, and his K-9 partner, “Buster”. He will be missed by his children, Nicholas, Anne Laskey (Todd) and Peter; his partner of 22 years, Sylvia Cooper and step daughter Melissa Cooper (Lauren); his grandchildren Micayla and Ryan; his sister Frances G. Miller (Thomas) and loving nieces and nephews. Nick’s viewings are scheduled for Monday evening (May 2nd) from 6pm to 8pm and again on Tuesday morning (May 3rd) from 10am to 12noon, both viewings are taking place in the Spilker Funeral Home, 815 Washington St., Cape May. Following the Tuesday morning viewing in the funeral home, Nick’s Mass of Christian Burial will begin at 12:30pm in Our Lady Star of the Sea Church, 525 Washington St., Cape May. Interment will follow in Holy Cross Cem., Mays Landing. In lieu of flowers, memorial contributions may be made to: Cape May County K-9 Association, c/o Cape May County Sheriff Office, 9 North Main St., Cape May Ct. House, NJ 08210. - Although this website offers many options to send flowers, PLEASE observe the request of the family to send a memorial contributions instead (see above).

GALLACCIO, Nicholas William - 71, of Cape May, passed away peacefully surrounded by his family at Cape Regional Medical Center on April 27, 2016. Nicholas was a graduate of Wildwood Catholic High School, Class of 1962. After 27 years of service,... View Obituary & Service Information

The family of Nick Gallaccio created this Life Tributes page to make it easy to share your memories.

GALLACCIO, Nicholas William - 71, of Cape May, passed away peacefully...

Send flowers to the Gallaccio family.