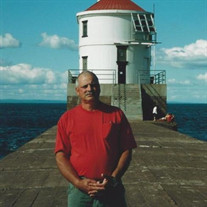 FEDOROFF, Nicholas M. - 65, of Cape May, passed away on February 19, 2015 at home surrounded by family and friends. He was born on July 10, 1949 in Chester, PA and grew up in Twin Oaks, PA. He graduated from St. James HS, Chester in 1967 and the University of Wisconsin Superior in 1971. He started his career with the Cape May Police Department as a Summer Officer in 1972 and became a full-time officer in December. He worked his way up the ranks from Patrolman to Detective, Detective Sergeant and Captain. His partners were Bob Boyd and Diane Sorantino. He retired after 26 years of service. After retirement he worked part-time with his best friend Ed Doyle at Ed's company, CSERT, as a safety officer. He worked on the Athos, Calcasieu and Deepwater Horizon spills. This work led to his part-time employment at Northstar Marine working on the oil spill recovery boat, the Lynn Frink. Nick is dearly missed by his loving family which includes his wife of 42 years, Sandy; his son, Kent; sister, Anne (Stanley) Poleck; brother, Francis (and Stephanie) Fedoroff; extended family and many friends. He enjoyed traveling with Sandy, sporting clay shooting with his friend & partner Diane Sorantino, boat building and woodworking. He and Kent shared a love of sports. Nick was an active member of the Cape May Kiwanis and Past President of PBA Local 59. Nick will always be remembered as one of the “good guys”. Nick’s memorial gathering will take place on Saturday (Feb. 28th) at the Spilker Funeral Home, 815 Washington St., Cape May from 11am – 12:30pm immediately followed by a time of remembrance by family and friends. Interment is private and at a later date. In lieu of flowers, memorial contributions can be made to the Nick Fedoroff Community Kindness Fund, 9 Melody Court, Cape May, NJ 08204. Info and condolences: spilkerfuneralhome.com

The family of Nick Fedoroff created this Life Tributes page to make it easy to share your memories.

Send flowers to the Fedoroff family.