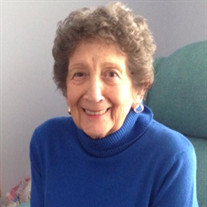 Nena Montero Reed Kowalski went to be with her Lord and Savior on December 18, 2017. Nena was born on March 25, 1930 in Vertientes, Cuba. She bravely emigrated to Philadelphia with her Mother in 1943 without knowing a word of English. She completed her public schooling at Penns Grove High School, NJ. There she met, fell in love and married her high school sweetheart, Robert T. Reed Jr. They married in 1952 and soon had two children, Robert T. Reed III and Dori Ellen Reed. Nena was a loving, generous, resourceful woman who made everyone around her happy. Her warm hugs made you feel as if you had been lifelong friends. Nena, Mom, Grandmom, Mom-mom, Tia Nena will be remembered and treasured as a unique person who always added to your life, not subtracting from it. She was always so much fun and had many friends at Victorian Towers in Cape May, NJ. Nena was a fabulous cook and baker, whether it was for her children’s friends after school before a basketball game at her house, for 200 plus campers at the YMCA Camp in Greenville, SC, or baking birthday cakes for her family and friends at the “Towers.” Nena later married William Kowalski and enlarged her love and family to also include his daughter, Susan Boehm. Nena was preceded in death by her parents, Miguel Montero and Dora Montero Groeber as well as many family members in Cuba and the United States. Nena is survived by her sister, Deborah Groeber DeGroff, husband, Trip and her 6 nieces and nephews. Also surviving are her son, Robert T. Reed, wife Maura and daughter Dori Ellen Mueller, husband Garry. She is also survived by 9 grandchildren and 6 great grandchildren. In lieu of flowers, please make a donation in memory of Nena to The Wounded Warrior Project. A Memorial Mass will be celebrated at Star of the Sea Catholic Church in Cape May, NJ on Friday, January 12, 2017 at 1pm where friends will be received prior to Mass from 12:30 pm until 1pm.

Nena Montero Reed Kowalski went to be with her Lord and Savior on December 18, 2017. Nena was born on March 25, 1930 in Vertientes, Cuba. She bravely emigrated to Philadelphia with her Mother in 1943 without knowing a word of English. She completed... View Obituary & Service Information

The family of Nena Kowalski created this Life Tributes page to make it easy to share your memories.

Nena Montero Reed Kowalski went to be with her Lord and Savior...