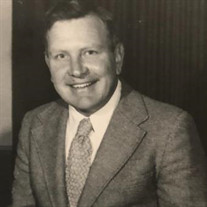 Former Cape May City Mayor and Councilman, Arthur “Mickey” Blomkvest, 83 of South Seaville, NJ, passed away on Saturday, January 19th 2019. A lifelong Cape May resident, Mickey was Mayor at the time Cape May City became a National Historic Landmark. Fueled by his passion for the City he served, Mickey successfully lobbied the federal government for beach restoration funds that were the foundation for Cape May's beaches today. He was proud to have been the only Mayor who held the City tax line for 11 out of 12 years. He was predeceased by his Swedish parents, Elmer and Alice Blomkvest of Cape May and brother Elmer (Sonny) of Virginia. Mickey was a master carpenter, renowned in the area for specializing in Victorian Restoration. His work lives on at Cape May's "Pink House.” Mickey served on Cape May City Council from 1968 to 1972 and was proud to serve as Cape May's Mayor from 1976-1988. Mickey is survived by his beloved wife of 64 years, Mildred Needles Blomkvest; his five children, Stina Smith, Majken Mechling, Dagmer Chew, Stig Blomkvest and Annika Nash; his brother, Charles of Ewing, NJ as well as his eleven grandchildren and five great grandchildren, and last but not least his devoted companion and ever faithful dog, Teddy. Relatives and friends will be received on Sunday, February 3rd, from 11 am until 12 noon in Cape May City Hall, 643 Washington St., Cape May, where a memorial ceremony in the form of family and friends sharing thoughts and memories will follow and begin at 12 noon. In lieu of flowers donations can be made to: Belleplain Emergency, 167 Broad Street, Belleplain, NJ 08270.

The family of Mickey Blomkvest created this Life Tributes page to make it easy to share your memories.