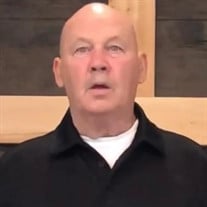 Michael “Mikee Whiteshoes” Francis Williamson Michael “Mikee Whiteshoes” Francis Williamson, 66, of Wildwood, NJ, was welcomed into Heaven on Saturday, September 4, 2021. Born on February 25, 1955 in Philadelphia, PA, he was the son of the late John Elijah and Elaine Mae (Ward) Williamson. Michael attended St. Gabriel's High School in Philadelphia and enlisted in the US Navy. Evangelist, Street Preacher, Lover of Jesus, “Mikee Whiteshoes” was a fighter. As hard as he fought against men at the beginning of his life, as a boxer, he fought for the souls of men at the end of his life, as a minister of the Gospel - especially to the forgotten men and women in the nursing homes and shelters of Philadelphia and South Jersey. Mikee was a student and devoted teacher of the Bible who not only hid scripture in his heart, but proclaimed it and put it into action. Mikee was a powerful voice for the Kingdom of God, ministering salvation through Christ Jesus. His own life was a witness to the saving grace of God and he urged others to receive Jesus and allow Him to change their lives from the inside out. He was a founder of Lost Sheep fellowship, forerunner of The Jesus House ministry, which first began meeting at Clary’s Restaurant of Cape May Court House. Mikee was a Christian leader who attracted and motivated teams of Believers to participate in ministry to others, leading by example. He was a powerful engine for the Gospel, organizing coat drives and Christian outreaches to recovering addicts through The Jesus House ministry at The Last Stop in the Kensington section of Philadelphia and at The Carpenter’s Shop of Wildwood, the Revolve Church of North Cape May and the Atlantic City Salvation Army, in conjunction with If Not For Grace Ministries. Mikee frequently preached at Teen Challenge and the Atlantic City Rescue Mission. Some of his messages are posted on YouTube and Vimeo.com. Though Mikee had friends and ministry supporters among many South Jersey Churches, his final affiliation was with the Revolve Church of North Cape May and Iglesia Cristiana Oasis de Bendicion of Rio Grande. Michael is survived by his loving wife, Justine Namuyanja Williamson; his children and their spouses: son Michael Williamson and children, Michael, Selena and E.J.; son Tommy Williamson and his son, Tommy; daughter Lisa (Anthony “Peanut”) Hickman and their children, Kristopher, Eric and Rylee; son Joey (Kim)Williamson and their daughter, Karlee. Michael is also survived by his siblings and their spouses: Alice (David) Guld, John “Buddy” (Judy)Williamson, Andrew (Donna) Williamson, Kathleen (McAvoy) Callaghan, Francis (Dawn) McAvoy and Elaine “Lainey” McAvoy. He was preceded in death by first wife, Susan (DiMedio)Williamson. Funeral service will be at the First Assembly of God, Cape May, on Friday, September 10 with visitation 10-11AM, memorial service 11AM and interment following at Seaside Cemetery, Marmora. Arrangements are by the Spilker Funeral Home, Cape May. All attendees are invited to wear white shoes to the service in honor of Mikee’s life and ministry.

The family of Michael "Mikee" Williamson created this Life Tributes page to make it easy to share your memories.

Send flowers to the Williamson family.