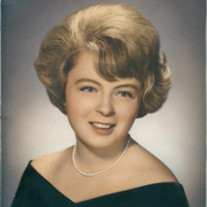 VAN ORDEN, Maureen R. - 72, of Lower Township died on Thursday, April 14, 2016 after a long, courageous battle with cancer. She was born October 13, 1943 in Brooklyn, New York to the late Albert and the late Theresa Butler (nee Kenny). She was also predeceased by two sons, Brendan and Paul Van Orden; and four brothers, Richard, Albert, Thomas and Lawrence Butler. Left behind to cherish her memory are her husband of 51 years, Robert A. Van Orden; her daughter, Karen E. Van Orden and her two sons, Barry B. and Robert J. Van Orden; her sister, Linda Gallagher; and her grandchildren, Holly and John Karavanas. She graduated from DePaul Catholic High School and William Paterson University (Paterson State) in Wayne, NJ earning a bachelor’s degree in Biology. After raising her family in South Plainfield, NJ, she moved to Cape May County in 2000. Selflessly devoted to her family, she will be remembered as source of wisdom, faith and simplicity. Friends and family are invited to attend Maureen’s viewing on Saturday (Apr. 23rd) from 10am – 10:50am in St. John of God RC Church, 680 Townbank Road, North Cape May where her Mass of Christian burial will begin at 11am. Interment will follow in the Cold Spring Cemetery, Lower Twp. In lieu of flowers, donations in Maureen’s memory may be made to Love of Linda Cancer Fund, PO Box 1053, Wildwood, NJ 08260 or to the Christ Child Society, PO Box 882, N. Cape May, NJ 08204. - Although this website offers many options to send flowers, PLEASE observe the request of the family to send a memorial contribution instead to either one of the two organizations named at the bottom of Maureen's obituary.

VAN ORDEN, Maureen R. - 72, of Lower Township died on Thursday, April 14, 2016 after a long, courageous battle with cancer. She was born October 13, 1943 in Brooklyn, New York to the late Albert and the late Theresa Butler (nee Kenny). She... View Obituary & Service Information

The family of Maureen R. Van Orden created this Life Tributes page to make it easy to share your memories.