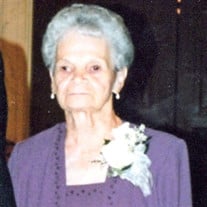 PANNY, Mary F. – 88, of Ocean View, passed away peacefully on Tuesday evening, October 14, 2014. Mary graduated with a nursing degree from Pottsville Hospital Nursing School and a Masters’ Degree in Education from West Chester University. She worked at Children’s Hospital of Philadelphia for 23 years. Mary then worked as a school nurse for the Southeast Delco School District for 10 years. After retiring in 1988, she and her husband moved to Ormond Beach, Florida where they enjoyed traveling with family and friends. Some of their favorite trips included Hawaii, Disney World, Las Vegas and cruises to anywhere. Mary was very involved with “The Fall Serenaders”. She sang and danced with every show they performed. Mary will be remembered as a loving wife, mother, sister and nana. Mary enjoyed a marriage of 63 years to the late Edward J. Panny (2010). She was also predeceased by her son, James Panny (2001). Mary will be dearly missed by her loving family which includes her two children, Carol (and Chas) Lockard and Edward (and Marge) Panny; daughter-in-law, Maryann Panny; sister, Ann (and Jack) Funk; brother, Vincent (and Dorothea) Tomaino; five grandchildren, Kathleen, Eric, Michael, Mark and Kristen; four great grandchildren, Jason, Joseph, Andy and Nicky; also four nieces and two nephews. Mass of Christian Burial will be celebrated on Saturday (Oct. 25th) at 1:30PM in Our Lady Star of the Sea Church, 525 Washington St., Cape May where relatives and friends will be received from 12:30pm – 1:30pm. Interment will be private and at a later date. In lieu of flowers, memorial contributions are suggested to: Assisted Living Residents Council at The Residence at Ocean View, 2721 Rte. 9, Ocean View, NJ 08230.

The family of Mary F. Panny created this Life Tributes page to make it easy to share your memories.

Send flowers to the Panny family.