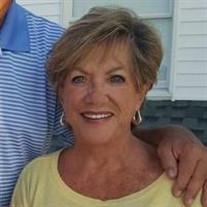 NOTICE OF MEMORIAL CEREMONY Relatives and friends will be received on Sunday (July 11th) at the Corinthian Yacht Club, 1819 Delaware Ave., Cape May from 11:30am until 12pm with Mary's memorial ceremony, in the form of family and friends offering thoughts, memories and expressions, beginning at 12pm. Following the ceremony, all are invited to stay for food, refreshment, music and fellowship to celebrate Mary. Mary M. (Cardoso) Patrick - Age 82, of West Cape May, NJ formerly of Media, PA passed away in her home surrounded by her loving family on May 7, 2021. Born in Ridley Park, PA to William and Mildred Marryott, Mary graduated from Interboro High School in 1956. She was voted Best Dancer & Most Athletic, had the leading role in the school play her senior year, and was Co-Captain of the Cheerleading squad. After graduation, Mary worked at Boeing as an Office Administrator, but she would later embark on a very successful career in Real Estate. Her longest and most notable position was with Fox & Lazo Realtors as Manager of their Media PA office. She was named the first female Vice President in 1985 and became Regional Vice President shortly thereafter. In 1988, her Media office became the #1 Sales Office in the entire Company and was the first PA office to reach this distinction out of 32 company offices across 3 states (PA, NJ & DE). In 2003, Mary moved to West Cape May NJ and began the transition to making Cape May her full-time residence. She loved having her family visit and spending time with them at the Cape May Beach Club. She was an avid reader and started playing Bridge where she met many new friends and became an excellent player. She worked for a brief time at Wilsey Real Estate in Cape May before deciding to retire full time and enjoy all that Cape May had to offer. Mary is predeceased by her parents; her brother, William Marryott, and her grandson, Daniel J. Waite. Mary will be lovingly remembered by her spouse, George Patrick; her sons, Donald S. Waite and Michael A. Cardoso; her daughter, Michelle L. Risnychok (Robert); her sisters, Anne Ferrari (Fred) and Linda Trowbridge (Skip) and her brother, Jack Marryott (Teri). Adoringly known as “Mimom” to her six grandchildren & four great-grandchildren, she will be greatly missed. In lieu of flowers, memorial contributions can be made to the Juvenile Diabetes Association, online at Click Here

NOTICE OF MEMORIAL CEREMONY Relatives and friends will be received on Sunday (July 11th) at the Corinthian Yacht Club, 1819 Delaware Ave., Cape May from 11:30am until 12pm with Mary's memorial ceremony, in the form of family and friends offering... View Obituary & Service Information

The family of Mary M. (Cardoso) Patrick created this Life Tributes page to make it easy to share your memories.

NOTICE OF MEMORIAL CEREMONY
Relatives and friends will be received...