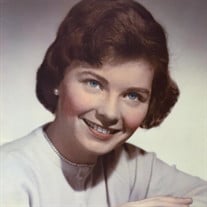 Mary Anne Barnes - of Cape May, NJ, passed away peacefully at her home on Monday, Feb. 17, 2020, after a long illness. She was 83. She was born in Philadelphia, PA, to John Edward and Katherine Lillian McCormack. More than eight decades later, she stood at the center of a large and loving family, pulling each of them close in her last days. Raised in Narberth, PA, she attended St. Margaret’s grade school and was a 1954 graduate of St. Katharine’s High School, where she played on the girls’ basketball team. She spent all her summers in Cape May, finally moving there year-round in 1979. She worked as a legal secretary for Gaver & Mead Law Firm, later Gaver & Gaver, on Decatur Street. She loved spending a day at the beach. She taught her daughters and all her grandchildren to get there early and stay late. If it wasn’t a beach day, she would simply “take to her bed.” She and her husband, Jake, owned Cottage by the Sea, a guest house on Jackson Street with a front porch made for people watching. Each night through the summer, family and friends gathered there for a glass of wine, maybe a Rob Roy, and some stories. She and Jake spent over 20 winters with cherished friends at Envoy Point in St. Pete Beach, FL. Mary Anne had gumption and style but was best known for her sense of humor. She became the 1958 Froth-Blowing Champion at the Ugly Mug. She was a long-time member of the Windsor Wonders and the West Cape May Yacht Club & Marching Band. She immersed herself in books and crossword puzzles. She liked to listen to Irish music at Carney’s. She danced with her grandchildren, sang with them, and took time to know each of them, which made her the best "Grammy" ever. She had pushed through adversity to build her life by the sea but once she arrived, it became a safe harbor for a family that grew in numbers, and in love. In addition to her parents and her husband, George F. Barnes Jr., Mary Anne is predeceased by her sister, Sister Katharine McCormack; her brother, John Edward McCormack Jr., and her nephew, Brian McCormack. She is survived by her three daughters, Patti Wall (Greg), Kathleen Tobin (Tom) and Mary Beth Brown (David); eight grandchildren, Elizabeth, Maggie, Katie, Anna, Jackie, Sarah, Patrick and David III; her sister-in-law, June McCormack; three nephews, John, Kevin and Christopher; and two nieces, Amielyn and Brittaney. Mary Anne’s Mass of Christian Burial will be celebrated on Friday (Feb. 21st) at 1:30pm in Our Lady Star of the Sea Church, 525 Washington St., Cape May where there will be a viewing from 12:30pm until 1:20pm. Interment will follow in Cold Spring Cem., Lower Twp. In lieu of flowers, memorial contributions are suggested in Mary Anne’s name to the American Lung Association through “In Memory Of” for acknowledgement and convenience purposes by visiting www.inmemof.org/mary-anne-barnes

Mary Anne Barnes - of Cape May, NJ, passed away peacefully at her home on Monday, Feb. 17, 2020, after a long illness. She was 83. She was born in Philadelphia, PA, to John Edward and Katherine Lillian McCormack. More than eight decades later,... View Obituary & Service Information

The family of Mary Anne Barnes created this Life Tributes page to make it easy to share your memories.

Mary Anne Barnes - of Cape May, NJ, passed away peacefully at...