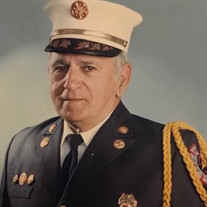 FRANCO SR., Mario A. “Marty” – 89, of North Cape May, passed away peacefully on Wednesday, January 16, 2019. A man of honor, Marty served in the United States Army during the Korean War. He owned his own plumbing business, Marty Franco Plumbing & Heating, from 1969 until 1991 when he retired and his business now continues under his son-in-law’s management as Cardaci Plumbing. Marty was a Chief of the Town Bank Fire Co. from 1962-1975 and he was also a past president and trustee. He served as Fire Commissioner and was a life member of the TBFC and State Fireman’s Assoc. Always involved in the community, Marty was an Assistant Scout Master of Troup #188; Vigil Member of The Order of the Arrow; Past President and Trustee of Lower Twp. Rotary; Paul Harris Fellow Rotary International; past member of Lower Twp. Moose; founder and former president of LCMR Football Boosters Assoc. and former president of the Lower Twp. Whalers semi-pro baseball team. In his younger years and into his 30s, Marty played semi-professional football for the Wildwood Islanders. His children and their friends remember him from their childhood as the “Ice Cream Guy” in their neighborhood as he made them all homemade ice cream on a regular basis. He enjoyed hunting, snowmobiling, and his grandkids. He was the spiritual head of his family, leading as an example of integrity, charity, and loyalty. He is predeceased by two brothers and a sister. Marty is forever loved by his family which includes his wife of 65 years, Jean; three children, Jeannie (and Chris) Monge, Marty (and Margie) Franco and Linda (and Gregg) Cardaci; brother, Charles Franco; 9 grandchildren; 10 great grandchildren; special niece, Joan, as well as many loved nieces and nephews. Relatives and friends will be received on Thursday (Jan. 24th) from 10 am until 12 noon in the Spilker Funeral Home, 815 Washington St., Cape May where Marty’s funeral service will begin at 12 noon. Interment will follow in Tabernacle Cem., Lower Twp. In lieu of flowers, memorial contributions are suggested to: Ranch Hope (Alloway Campus), 45 Sawmill Rd., PO Box 325, Alloway, NJ 08001. Info and condolences: spilkerfuneralhome.com

The family of Marty Franco Sr. created this Life Tributes page to make it easy to share your memories.

Send flowers to the Franco family.