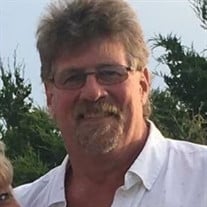 STILLWAGON, Mark T. “Big Guy” – 60, of Cape May passed away after a long and courageous battle with heart disease on Wednesday, June 17, 2020. Mark was born and raised in New Kensington, PA; graduated from St. Joseph’s High School, New Kensington, PA and later attended Penn State University where he pursued a degree in landscape architecture. Mark fell in love with the Jersey Shore, and with the sand in his shoes he made Cape May his home in the early 1980s. Upon his move to Cape May, he quickly became part of the fabric of the Cape May Community where he was the chef at the Pilot House for 32 years. He was fun-loving, hardworking, generous, witty, funny and a devoted family man who always did everything to the fullest. Mark was an avid Pittsburgh fan to say the least, as well as a die-hard Penn State fan. With an inquisitive mind he was always interested in art (self-taught artist), music, history, agriculture and landscaping, reading, traveling, sports, collecting baseball cards and caps, gardening indoors and outdoors, aquariums and fish; he loved fishing too! He had a passion for cooking and his hero chefs were his father, James Stillwagon, and the world-famous, James Beard. Mark loved hanging out in his man cave listening to his music and 45s. If you knew him in his younger years, you may have known him as “Stilts”, which came from his love for basketball. Above all these things in Mark’s life, anyone who was blessed to know him knew his greatest treasures were, and STILL ARE, his family and his many dear friends. He is predeceased by his mother, Patricia; his father, James and his brother, Jimmy. Mark is dearly missed and forever loved by his family which includes his wife of 20 years, Shelly; two children, Callie and Kyle; siblings, Patti (and Mike) Mullally, Susan (and Don) Johnson; David Stillwagon (Colleen) and Charles “Chuck” Stillwagon (and Bill); sister-in-law, Lori Stillwagon, his maternal in-laws, Joanne and Ed Foster and George and Mary Gaorfal, as well as many nieces, nephews and many dear friends. Mark’s memorial ceremony and celebration of his life will take place at a later date when we are all able to gather in the numbers that would be anticipated for the Big Guy. In the meantime, the family is very closely monitoring the sentiments that are being sent through Mark’s memorial webpage at www.spilkerfuneralhome.com and they greatly appreciate all the love that is being shown to them during this time.

The family of Mark Stillwagon created this Life Tributes page to make it easy to share your memories.