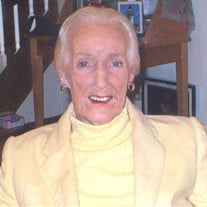 Marion Bermender - 102, of Cape May, passed away peacefully on Tuesday, February 3, 2015. She had resided at the North Cape Center for approximately the last four years. At the time of her death she was the oldest resident at the center. She was born in Bala Cynwyd, Pa. on October 20, 1912. She was predeceased by her parents, George Freshell Adam and Bertha Moore Adam. She was also predeceased by her husband, Sterling Bermender, Sr. with whom she had been married for 54 years. In addition, she was predeceased by her son, Sterling (Skip) Bermender, Jr. Mrs. Bermender was educated in the Lower Merion schools in Ardmore, Pa. Mrs. Bermender was an accomplished artist. She received two scholarships for art. One from the Vocational Art School in Philadelphia, the other was from the Chester Springs Academy given by D. Roy Miller. She was very artistic and with her husband they owned and operated a flower shop in Narbeth, Pa. called the Valentine Flower Shop for many years. Around 1981 they retired and moved to Cape May where Mrs. Bermender volunteered at the Cape Regional Medical Center (formerly Burdette Tomlin Mem. Hosp.) for 24 years. Over the years Mrs. Bermender had given many art exhibitions and she worked in various different art mediums. She volunteered at the Cape May Colonial House and she served as a judge for many Easter parades. Mrs. Bermender was very active in civic affairs in the Marlton area where she worked with handicapped children teaching them art, and with the Beeler School for several years. Mrs. Bermender is survived by two grandsons, Douglass and David Bermender. She is also survived by her sister's children, Louis H. Elwell, Jr. (Carol), Robert W. Elwell, Sr. (Jane), and Dorothy Elwell Sheehan and many loving great nieces and nephews all of whom will miss her dearly. Funeral services will be held on Monday (Feb. 9th) at 11am in the Spilker Funeral Home, Cape May where there will be a viewing from 10am–11am. Interment will follow in Cedar Green Cem., Clayton. In lieu of flowers memorial contributions are suggested in Mrs. Bermender's name to the Autism Fund, P.O. Box 2341, Ventnor, N.J. 08406 or online at www.faces4autism.org Info and condolences: spilkerfuneralhome.com -

Marion Bermender - 102, of Cape May, passed away peacefully on Tuesday, February 3, 2015. She had resided at the North Cape Center for approximately the last four years. At the time of her death she was the oldest resident at the center.... View Obituary & Service Information

The family of Marion Bermender created this Life Tributes page to make it easy to share your memories.

Marion Bermender - 102, of Cape May, passed away peacefully on...

Send flowers to the Bermender family.