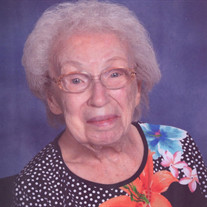 PECK (nee Key), Margaret E. – 101, of West Cape May passed away peacefully on Sunday, September 3, 2017 surrounded by her family. Married to the late Robert R. Peck, step-mom to the late Robert F. Peck (Florence), one sister, the late Lula M. Ludwick (Walter). Margaret attended Cape May United Methodist Church for many years serving in many capacities there with much gladness in her heart to the Lord and fostering many lifelong friendships. She worked in the 30’s and 40’s for the American Store (now Acme) having managed stores in Cape May, West Cape May and Wildwood. Sadly missed by her loving daughter and caretaker Barbara Gruver (Linden), son Howard (Arlene), grandsons Robert (Christine), David (Jeanette), James (Janet), Marcus Gruver (Karol) and Joey. Great-grandchildren RJ (Johanna), Matthew, Allison Snyder (John), Amanda Felsing (Jason), Sarah, Danielle and Nicole. Five great-great grandchildren and counting. One niece Bette Jones (William) and one grand-niece-in-law Sharon Collins. The family would especially like to thank all the Nurses and Nurses Aides at Victoria Manor Nursing Home for their compassion and care of Margaret during her brief time there. Funeral services will be held on Tuesday (Sept. 12th) at 11am in the Cape May United Methodist Church, 635 Washington St., Cape May where friends will be received from 10am until 10:50am. Interment will follow in the Cold Spring Cemetery, Lower Twp. If desired, donations may be made in her memory to Cape May United Methodist Church, 635 Washington St., PO Box 472, Cape May, NJ 08204. Although this website makes it very convenient and offers many options to send flowers, PLEASE OBSERVE the request of the family to send a memorial contribution instead to: Cape May United Methodist Church, 635 Washington St., PO Box 472, Cape May, NJ 08204.

The family of Margaret Peck created this Life Tributes page to make it easy to share your memories.

Send flowers to the Peck family.