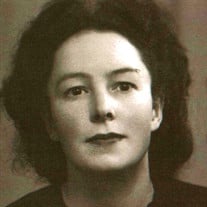 DEVANEY, Margaret – 97, of Cape May passed peacefully on January 17, 2015 surrounded by her loving family. Born in Tourmakeady, Ireland in 1917 into a family of seven siblings, Peg enjoyed the beauty of a hard working family and a glorious country. She moved to England at age 18 and met the love of her life and future husband, Jim Devaney, several years later. Together they survived the war, emigrated to America, travelled extensively in the United States and had three children along the way. They eventually retired to Cape May in the mid nineteen eighties. To those who knew her, Peg was quick with a smile and a generosity that touched the heart. She was best known as an incredible gardener, a darn good dancer and baker and an amazing seamstress and knitter of all things great and small. She was active in the Cub Scouts, Altar and Rosary Society and the Girls Club 1963-1969 who knitted for those in need. She was also a member of Our Lady Star of the Sea Church, Cape May. She is predeceased by her mother and father and seven siblings and her ever devoted husband of 62 years, James Devaney. Missing her always will be her children, daughters Mary and Pat and son, Michael (Susan) Devaney as well as five grandchildren, Sean, Kevin and Ian Devaney and Devyn and Chase Bader. She will also be missed and is forever thankful to her live in aide, Mercy, who enriched her life for the past five years and Marge Dougherty, who brought her communion during her house bound days. Mass of Christian Burial will be celebrated on Monday (Jan. 26th) at 1:30pm in Our Lady Star of the Sea Church, 525 Washington St., Cape May where there will be a viewing from 12:30pm – 1:20pm. Interment will follow in St. Mary’s Cemetery, Cape May. (Spilker Funeral Home, Cape May) info and condolences: spilkerfuneralhome.com -

DEVANEY, Margaret &#8211; 97, of Cape May passed peacefully on January 17, 2015 surrounded by her loving family. Born in Tourmakeady, Ireland in 1917 into a family of seven siblings, Peg enjoyed the beauty of a hard working family and a glorious... View Obituary & Service Information

The family of Margaret Devaney created this Life Tributes page to make it easy to share your memories.

DEVANEY, Margaret – 97, of Cape May passed peacefully on January...

Send flowers to the Devaney family.