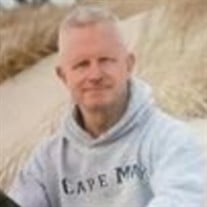 Marcus D. Wrotny Obituary Wrotny, Marc – 61 of Cape May Point, NJ, passed away suddenly on March 21, 2022. Marc is the beloved son of the late Dorothy (nee Skowronski) Wrotny and the late Walter A. Wrotny. Marc grew up in Voorhees, NJ and graduated from Bishop Eustace Preparatory School (1978). He attended college as an ROTC candidate and graduated from North Carolina State University with a B.S. in Aerospace Engineering (1983), and from Embry-Riddle Aeronautical University with a M.S. in Aeronautical Science (1997). Marc proudly served his country for 20 years as an officer in the U.S. Air Force. During this time, he piloted various aircraft including Gulfstreams, C-141s, and KC-10s. Marc also acted as a Deployed Operations Officer for multiple KC-10 aircrews during the Bosnian air campaign. Marc served as Chief of Operations in connection with many combat and non-combat efforts and as an instructor pilot. Most notably, from 1998-2003, Marc served at Andrews AFB in the prestigious 89th Airlift Wing where he was responsible for the safe transportation of many high-ranking military and civilian dignitaries, including the President and Vice President of the United States, and members of the Cabinet and Congress. After retiring from the USAF, Marc moved to Chicago, IL to work as a private G-IV pilot for Astor Street Management. Most recently, pursuing his passion for flight instruction, Marc served as a Gulfstream ground and simulator instructor at Flight Safety International, in Wilmington, DE, receiving awards and accolades for his expertise. Marc loved his family, his beloved German Shepard Tucker, and his friends. He could often be spotted on the beach in Cape May Point or around town in Cape May - catching a coffee in the morning, or a glass of wine and dinner around town in the evenings. He will be missed by many. Marc is survived by his cousins, Nadine Grassi and her two children, Samuel and Julia, Joseph and Lia Grassi, their two daughters, Micaela and Emma, Linda and Marty Schramm and their daughter Aurora, Paula Kaye Martin, and Carolyn Ciniglia, as well as many close friends and his beloved German Shepard, Tucker. A Catholic Mass in Marc’s memory will be held on Saturday May 14 at 11am at Our Lady Star of the Sea, 525 Washington St., Cape May, NJ, immediately followed by a gathering and ceremony on the beach across from the Beach Shack and Rusty Nail restaurant at 205 Beach Ave., Cape May, NJ. In lieu of flowers donations to St. Jude Children’s Research Hospital. (Spilker Funeral Home, Cape May for info and condolences: spilkerfuneralhome.com)

The family of Marc Wrotny created this Life Tributes page to make it easy to share your memories.