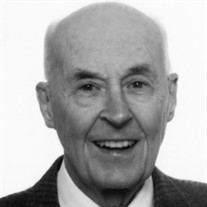 Malcolm Cavanagh Fraser, 91, passed away on Saturday, November 13, 2021 at his home in Cape May Point, NJ. He was born in Englewood, NJ on November 26, 1929 to Stanley and Helen Fraser (nee Cavanagh). He lived in Englewood, NJ and Brooklyn, NY until the age of 7 when he moved to Nutley, NJ where he spent his growing up years. He graduated from Nutley High in 1947. In 1951 he received a ME degree from Stevens Institute of Technology in Hoboken, NJ. He continued his education by taking several graduate courses at Stevens Institute and at Alexander Hamilton Institution studying Industrial Management and Business Administration. After graduating from college in 1951, Malcolm worked for Ingersoll-Rand for 40 years with 2 years out serving in the Army in El Paso, TX during the Korean Conflict from 1954 to 1956. Throughout his career with Ingersoll-Rand, he worked for the company in New York City, Corning, NY, The Netherlands, and Houston, TX. Forty percent of his business career was in International Business. From 1975 to 1983 he was a cognizant member of the Board of IR Compression Services SA, registered with the Dutch government. In his final decade with Ingersoll-Rand, he worked on special assignments, domestically and internationally, negotiating acceptable settlements when companies had significant difficulties. Malcolm loved Cape May Point and was honored when he was elected mayor in 1992 – a position he proudly served for 16 years. He always felt it was important to give back to a community and spent his life doing this wherever he lived. From 1962 to 1967 in Westfield, NJ he was co-chairman of the United Fund Residential Drive and was president of the YMCA Service Club. From 1967 to 1974 in Corning, NY, he was on the Board of Directors of the YMCA and president for 3 terms; Treasurer for the Boy Scout Troop Committee; and on the vestry of Christ Episcopal Church. From 1978 to 1980 while living in the Netherlands, he was on the School Board of the American School of the Hague. From 1988 to 1992 he was on the Board of Directors of the Cape May Point Taxpayers Association and president for 2 terms. He was also a Trustee of the Historic St. Peters-by-the-Sea in Cape May Point. While in the position of Mayor representing the Borough of Cape May Point, Malcolm served as an active member on several State and Municipal Boards. He was on the Board of Directors of New Jersey Rural Water serving as president for 3 terms, was on the Executive Board of the New Jersey State League of Municipalities, was on the Cape May County League of Municipalities serving as president and vice president, was on the State Government CAFRA Committee and was in the Cape May Point Fire Company. Malcolm’s strong commitment to service was recognized. In 1967 he was selected as one of New Jersey’s 100 Most Active Citizens. In 1997 The DARs gave him an award for Excellence in Community Service. In 1998 the New Jersey’s Mayor’s Association gave him a reward for “Outstanding Leadership.” In 1999 NJ Rural Water Association gave him an award for “Dedication to the Rural Water Industry” along with a scholarship in his name. Starting at a young age Malcolm had a love for baseball, collecting metal soldiers and history. When a young boy, he started keeping baseball statistics. Later in adulthood, he put together everything he compiled, updated it and made it into a book titled “The Charmed Circle” which is displayed at The Baseball Hall of Fame in Cooperstown, NY. Excerpts from the book were also printed in a local baseball publication. As a young boy Malcolm would buy metal soldiers whenever he could earning money doing odd jobs in the neighborhood. Those metal soldiers along with his more recent purchased are historically placed in front of his impressive library stocked with history books. Malcolm strongly supported the Boy Scouts of America. He recognized the positive influence it had on youth and in leadership development. In 1945 he earned his Eagle Scout and was very proud that 3 of his sons achieved that rank as well. In more recent years Malcolm can be remembered walking around Cape May Point which he loved. He would walk miles with a purpose checking out many of the past and current projects going on at Cape May Point. Malcolm carried his strong values throughout his life. He was a man with great integrity. He was well-liked, respected and a true Gentleman. He had a remarkable ability to get people to work together and getting the job done. He had a great sense of humor and a warm engaging smile. His greatest achievement and most treasured is his family. Malcolm will be clearly missed and dearly loved by his family which includes his wife of 67 years, Joan (nee Iversen); six children and their spouses, Gordon (Susan), David, Stephen, Janice Seer (Kurt), Bruce, Andrew (Dawn); and eight grandchildren, Landon (Neil), Anna, Kurt Seer Jr, Trevor Seer, Erin Seer, Spencer Seer, John and Morgan. Relatives and friends are invited to visit at the viewing on Thursday, November 18, 2021 from 12:30 to 1:30pm at the Spilker Funeral Home, 815 Washington St., Cape May followed by a service at Church of the Advent, 612 Franklin St., Cape May at 2:00pm with interment immediately following at Cold Spring Cemetery, Cape May. In lieu of flowers, Memorial contributions to benefit the Alzheimer’s Association are suggested online through “In Memory Of” for acknowledgment, convenience and privacy purposes by visiting www.inmemof.org/malcolm-fraser Info and condolences: spilkerfuneralhome.com

Malcolm Cavanagh Fraser, 91, passed away on Saturday, November 13, 2021 at his home in Cape May Point, NJ. He was born in Englewood, NJ on November 26, 1929 to Stanley and Helen Fraser (nee Cavanagh). He lived in Englewood, NJ and Brooklyn,... View Obituary & Service Information

The family of Malcolm Fraser created this Life Tributes page to make it easy to share your memories.