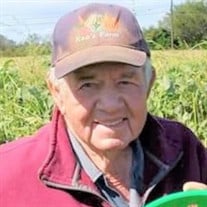 REA, Leslie C. “Les” – 86, of West Cape May, passed away on January 5, 2022. Born in Wildwood in 1935, Les has been a lifelong resident of West Cape May. He was a proud farmer his entire life, owning and working the land that has been in his family for the past 100 years. His hardworking and lovable personality beamed thru those big blue eyes, boyish grinning smile, huge hands, and sun quenched exterior. The true "Lima Bean King." He attended WCM Elementary and graduated from Cape May High School’s Class of 1954. In the fall of 1956, he went on U.S. Active Duty for 6 months then 5 1/2 years in the N.J. National Guard. He did basic training in South Carolina then stationed in Arizona. Parents were 4-H leaders, therefore Les was an active 4-Her winning many awards and honors. He met his wife Diane, in high school but did not start dating until after his active duty and she was in college doing her student teaching at CMHS, where his only brother, Ernie, was one of her students. Married in CM Methodist Church June 22, 1960 by the Tabernacle minister where they are members and children were baptized. As the son of a farmer his interest in farming started at an early age and his dedication to agriculture has never faltered. Over the years he had a small stock of beef cattle, hogs, sheep, horses, and chickens which lent diversity to the farm operation. On the family farm and nearby land, from 1940 to 1996 the Rea Farm produced up to 2000 acres of lima beans, field corn, and hay. In the late 1990's, the farm focus shifted from commercial wholesale lima bean growing to opening Rea's Farm Market with beach plums, strawberries, lima beans, and a variety of vegetables. Les loved the land and preserved the farm in 1999. Les was a staple at the Back Yard Farm Market, Strawberry, Tomato, and Lima Bean Festivals. Les was an active member of Future Farmers of America when attending CMHS with Jack Sayre as his advisor. He almost failed gym because he wanted to spend his time farming not playing football. His participation in 4-H activities resulted in the winning of numerous awards and honors. His leadership roles in these youth programs set a foundation for his involvement in the agricultural community. In 1968, he was recognized by the NJ Board of Ag as the Outstanding Young Farmer in NJ. He gave leadership to the CMC Board of Ag as President and advisor to the Farm Home Admin, as well as, an active delegate to State Ag Conv and NJ Farm Bureau where he contributed to agricultural by shaping policies for many years. He was a strong supporter of the 4-H Youth Development program where he directed and assisted in a variety of ways. Les served as chairman of the Advisory Council for Rutgers Cooperative Extension of CMC providing educational programs and advisor to the Cape Tech HS Agri-science and Horticulture Program. His community service reaches beyond the farm community by serving on the WCM Board of Ed, Planning and Zoning Board. He was member of Cape Island Masonic Lodge F&AM #30. Les worked with area schools and boy scouts with hayrides, camping, and farm education programs. Wearing his signature suspenders, he often pulled bands and floats in local parades with his tractor. A proud supporter of the NJ Audubon Society hosting birders from around the world at the "beanery" and the farm he so loved. He is predeceased by his parents, Leslie and Amy Rea; his son, Charles Rea and very recently, his daughter, Jeannette “Missy” Rea. Les is dearly missed and forever loved by his family which includes his wife of 61 years, Diane; daughter, Carol Rea Flynn (Kelly Keppel); three grandchildren, Tyler Flynn, Kaitlyn Flynn and Kiersten Keywood; brother, Ernest Rea; as well as extended family and many dear and lifelong friends. Les’ viewing will take place on Tuesday (Jan. 11th) from 10am until 11:30am in the Spilker Funeral Home, 815 Washington St., Cape May. His Masonic Service will begin at 11:30am in the funeral home and will be followed by his religious ceremony to begin at approximately 11:45am. The ceremonies in the funeral home are being offered via livestream for those who cannot attend physically. The livestream will be accessible at 10:20am by clicking this link https://www.hdezwebcast.com/show/les-rea-masonic-and-funeral-ceremony Interment will take place in Tabernacle Cemetery, Lower Twp. In lieu of flowers, memorial contributions are suggested to CMC 4-H Foundation or CTHS Agri-science Program.

Livestream will be accessible 11:20am on Tues., Jan. 11th. click this link https://www.hdezwebcast.com/show/les-rea-masonic-and-funeral-ceremony