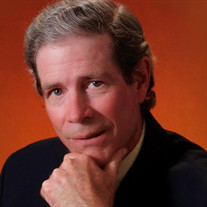 Leon Philip O’Connor III February 19, 1948 – March 21, 2021 Lee had a ready smile, a listening ear, a helping hand, a pure heart, and a certain way of calling a friend “you rotten kid,” that elicited instant laughter, particularly from youngsters. He loved spending time at his homes in Manhattan and West Cape May, NJ, and enjoyed riding his bike or scooter in both locations. From working back stage or on stage, to being in the audience, he was passionate about all aspects of theater. As an art and history lover, he enjoyed visiting museums and reading history books. In West Cape May, he looked forward to being the spelling bee moderator at the local elementary school, and scaring trick-or-treaters on Halloween from the front porch by making eerie sounds on a PA system. But spending time with friends and swapping stories - that was the best time of all. He died in hospice in his Jersey home with his wife, Gayle, by his side. Treatments for cancer began in October 2019, and due to the efforts of those at Weill Cornell/N.Y. Presbyterian and AtlantiCare, he had a few very good months. Those at Compassionate Care Hospice helped Gayle to help Lee through his final eight days. The oldest of Leon Philip O’Connor, Jr. and Kathleen Hubbell O’Connor’s seven children, Lee was born in Washington, D.C., and was raised in Levittown, Long Island and then Levittown, PA. A highlight at Neshaminy High School in Langhorne, was the first time he experienced being part of a choir, singing four-part harmony to Kern and Hammerstein II’s “All the Things You Are,” his second favorite song. This led to his performing in the high school musicals. After graduating in 1966, he studied liberal arts at Bucks County Community College and interned at Bucks County Playhouse. On February 24, 1969, Lee enlisted in the Army and was sent to Vietnam. While an infantryman in the field, he contracted jungle rot in his feet and had to be medivacked to Saigon, where he finished his service working with an Army theater troupe. He was honorably discharged on September 29, 1970, with the Combat Infantryman Badge, Sharpshooter Badge with Rifle Bar, National Defense Service Medal, Vietnam Service Medal, Vietnam Campaign Medal, and the Good Conduct Medal. In 1988, with the help of Alcoholics Anonymous, he stopped drinking. In 2014, he finally sought the real help he needed from the Veterans Administration, which formally declared that he suffered from PTSD. After Nam, he majored in history at Pennsylvania State University, and worked for IBM and 3M. In 1979, he moved to NYC where he met Gayle. They were married on November 8, 1981. In NYC, Lee was house manager at the Bijou Theatre, while starting to work on production crews, and sought work as an actor and stage manager, eventually becoming a member of Actors’ Equity Association. Credits include production assistant for “Liza with a Z” at Radio City Music Hall and “A Christmas Carol” at Madison Square Garden Theatre (10 years), stage manager for “Wuthering Heights: The Musical” at Second Stage, and prop master for “Penn and Teller Rot in Hell.” When Gayle was commissioned by The Smithsonian Institution to write a play about mental health advocate Dorothea Lynde Dix, she wrote the two-person “Not Above a Whisper” that she performed with Lee. After premiering at The Smithsonian, they performed for various mental health organizations throughout the country. Lee stage managed for several regional theaters, including East Lynne Theater Company (ELTC), where Gayle was already performing. It was while working for ELTC, with productions in both Rutherford and Cape May, that Gayle and Lee fell in love with Cape May and purchased a house here in 1993. When ELTC’s founder and artistic director passed away in 1998, the Board of Trustees asked Gayle to be the next artistic director, a position she still holds. Lee became the company’s technical director and stage manager. Together, they mounted 115 different productions between 1999 – 2020. He thoroughly enjoyed playing Sherlock Holmes in the staged readings of William Gillette’s “Sherlock Holmes” in 2003-2004, and then in the Sherlock Holmes’ NBC radio-style plays from 2005 – 2019. He also relished reading short stories as part of ELTC’s “Tales of the Victorians,” assisting Gayle when she directed plays at West Cape May Elementary School and at ELTC’s own Student Summer Workshop. From 1988 – 1993, Lee and Gayle were caregivers for friends with AIDS, and from 1990-2000, served on the Board of the Episcopal Actors’ Guild, an organization founded in 1923 to help professionals in the entertainment industry of all faiths. From 1999 – 2021, Lee served on the Board of ELTC, and from 2004 - 2021, volunteered for the Food Closet of Cape May City. He signed up as a volunteer for the fire department in 2018 as a “thank you” for the firemen who tried to save their 1840’s cottage in West Cape May. Lee is preceded in death by his mother, Kathleen Hubbell O'Connor; father, Leon P. O'Connor, Jr.; and nephew, Michael K. O’Connor. He is survived by his wife, Gayle Stahlhuth; and his siblings: Kathy Hart (husband Jack), Kevin O'Connor (wife Lauren), Mark O'Connor, Beth Worthington (husband Charles), Sean O'Connor, and Christopher O'Connor (wife Debora), as well as nieces and nephews and grand-nieces and nephews. Lee’s memorial ceremony can be attended via livestream only. Plans for a larger celebration will be made when the pandemic is over. The livestream memorial ceremony will take place on Saturday (April 10th) at 1pm in the Spilker Funeral Home, Cape May. The livestream will be active at 12:50pm and can be accessed by clicking this link https://client.tribucast.com/tcid/61121446 In lieu of flowers, Gayle requests making donations to the Lee O’Connor Memorial Fund at East Lynne Theater Company, PO Box 121, Cape May, NJ 08204. Checks may be made to the theater, with “Lee O’Connor Memorial Fund” on the memo line. Lee’s first favorite song: “When You Wish Upon a Star.”

The family of Lee O'Connor created this Life Tributes page to make it easy to share your memories.