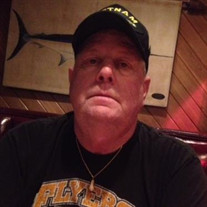 BROWN, Lawrence A., Sr. “Hoops” – 69, of Cape May passed away peacefully with his family at his side on Saturday, January 9, 2016. Born in Bryn Mawr, PA on September 18, 1946, Larry (“Hoops” as he was affectionately known to his family and friends) has been a lifelong resident of Cape May and was a graduate of Lower Cape May Regional’s Class of 1966. A man of honor, he served in the United States Army during Vietnam with the 25th Infantry DIA as a medic. Hoops enjoyed a 27 year career as a letter carrier with the US Postal Service in Cape May before retiring. He was a life member of the Cape May Volunteer Fire Dept.; a lifetime member of the VFW - Post 386, Cape May where he was Commander (2015-) and a longtime member and Past Master of the Cape Island Masonic Lodge #30 F&AM. Hoops was a happy-go-lucky man, he always had a story or a joke to tell and was well respected by many people. He worked in many restaurant establishments in Cape May as well as Key West, FL. Hoops enjoyed his retirement in Key West and many Happy Hours at the Hog’s Breath Saloon taking in many sunsets with friends and family. He is predeceased by his parents, Raymond and Anne (nee Heslip) Brown; his son, Marc David Brown; sister, Anne Thomas Reichner, brother, James Jay Brown and sister-in-law, Gail Brown. Hoops is dearly missed by his loving family which includes his three children, Lawrence Brown, Jr. (Kimberly Morgan), Kelly Ann Brown and Bruce Einar Brown; the mother of his children, Ina Brown; two grandchildren, Zachary and Delaney; brothers, Raymond (Betty Ann), David, Jerry (Jane) and John (Kathy); sister, Mary (Edward) Sokoria; daughter-in-law, Kathleen Douglass; many nieces and nephews; many great nieces and nephews, as well as all his “other sons and daughters” (close friends of his children). There will be a viewing Friday at the Spilker Funeral Home, 815 Washington St., Cape May from 6pm – 7pm with Masonic Service beginning at 7pm and an additional viewing on Saturday morning in Our Lady Star of the Sea Church, 525 Washington St., Cape May from 9am to 10:20am with Mass of Christian Burial beginning at 10:30am. Interment with Military Honors will follow in St. Mary’s Cem., Cape May. In lieu of flowers, memorial contributions are suggested to: Cape Island Masonic Lodge (scholarship fund), PO Box 2101, Cape May, NJ 08204-7101 or to the VFW Post 386 (scholarship fund), 419 Congress St., Cape May, NJ 08204. - Although this website offers many options to send flowers, please observe the request of the family to send a memorial contribution instead to the charities designated above.

The family of Larry Brown created this Life Tributes page to make it easy to share your memories.

Send flowers to the Brown family.