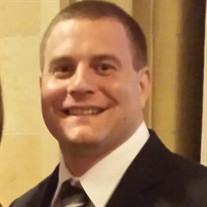 KARDOS, Kevin – 31, of Little Egg Harbor passed away unexpectedly at his home on Sunday, January 17, 2016. Kevin was born in Trenton, NJ. He had lived in a few different states and seen many different countries through his military service, before becoming a resident of Little Egg Harbor. Kevin served in an elite group of the military, known as the Air Force Special Operations Command (AFSOC), during the war in Iraq. He received many awards and honors, before he was retired in 2006. Kevin was employed in the Lead Defense Travel Administration at McGuire Air Force Base. He earned his Associates Degree from Ocean County College, and was currently a full time student at Richard Stockton University, pursuing a career in social work. His dream was to assist other veterans returning from war. Kevin was the All-American man, who enjoyed the outdoors – the beach, fishing, camping, and biking. He served his country, he wore a belt, and he drove a big red truck. He was muscular in build, which intimidated some people. But for those who knew him, you know he had one of the kindest and most sensitive hearts of anyone you have ever known. He always saw the good in people, and he always put others before himself. He was not a man of very many words, but you could always feel how much he cared. He strove to be the best at everything, with will and drive that far exceeded most people. Kevin is dearly missed by his loving family which includes his wife, Lauren (nee Schellinger); parents, Bob and Rose Kardos; brother, Darren (and Johanna) Kardos; as well as, his aunts, uncles, cousins, extended family, and his two four-legged children – his cats, Spooky and Annabelle. Funeral services will be held on Monday, January 25, at 12 noon in the Tabernacle United Methodist Church, 702 Seashore Rd., Cape May where friends will be received from 10am until 11:50am. Interment with military honors will follow in the Veterans Section of Cold Spring Cemetery, Lower Twp. In lieu of flowers, memorial contributions are suggested to the Wounded Warrior Project, 4899 Belfort Rd. – Suite 300, Jacksonville, FL 32256 or online at www.woundedwarriorproject.org/Donate - Although this website offers many options to send flowers, PLEASE OBSERVE the request of the family to send a memorial contribution in stead to the Wounded Warrior Project (info above).

KARDOS, Kevin &#8211; 31, of Little Egg Harbor passed away unexpectedly at his home on Sunday, January 17, 2016. Kevin was born in Trenton, NJ. He had lived in a few different states and seen many different countries through his military service,... View Obituary & Service Information

The family of Kevin Kardos created this Life Tributes page to make it easy to share your memories.

Send flowers to the Kardos family.