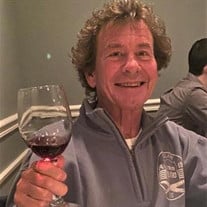 Kenneth Jerome Mount, age 65, passed away peacefully on May 2, 2021 surrounded by his loved ones at home in Cape May, NJ. Ken was born on July 15, 1955 in Chicago, Illinois to Jerome and Marilyn Mount. He graduated from Parks College of Saint Louis University in 1978 with a degree Aeronautical Administration and continued on to serve as a pilot in the Marine Corps before his life-long career in aviation insurance. He married the love of his life, Nellie Elizabeth Mount, on June 23, 1979. He is sadly missed by Nellie and their two children, Kristen Elizabeth (Rene) Ritter and Daniel Kenneth Mount. Arguably the most distraught of all is Ashes (the cat), lifelong best friend and lap-warmer to Ken. Kenneth was a man of many interests. He was an adventurer, both in reality and through the Tom Clancy and Clive Cussler novels that he devoured as soon as they were published. Ken was a pilot, scuba diver and an extreme skier. He travelled the world for work and leisure: from diving in Jamaica, to skiing in Canada, to touring Europe, Ken lived his life to the fullest. He was also a leader, both in business and in his personal life. He thrived in coaching his children’s soccer teams, pushing them to do their best. Athletics were very important to Ken; his favorite pastime during his retirement was joining the tennis club in Cape May, where he was an enthusiastic competitor. Ken was the ultimate retiree, enjoying daily sunset walks on the beach and plenty of cocktails while living in his favorite town. However, it would be negligent not to note that if you were to ask Ken to describe himself, he would not state anything within this myriad of accomplishments; Ken would say that his purpose in life was to be a father. Ken lived his days with the resolve to educate his children in everything that he could. He taught them to ski and to scuba dive, transforming family vacations into extreme adventures. When his children were young, he took them on self-titled “Daddy Adventures” to explore and teach them about the world around them. Whether it was hiking in nature preserves or swimming in (somewhat illegal) swimming holes, he always provided a thrilling outing. Kenneth was the ultimate provider, selflessly working to give his family every advantage in the world. His daughter attributes her wander-lust to the dolls that Ken never failed to bring her from each of the countries he traveled to for work, resulting in a colorful and extensive collection of culture. This quality led her to meet her husband Rene and move with him to Austria. Ken gave Daniel his lifelong passion for skiing, which has brought him to dozens of mountains across the world. Daniel will honor his legacy by thinking of him at the peak of every mountain he climbs. Kenneth wishes to spend eternity among the seas, so his ashes will be spread into the ocean by his family. For those who wish to offer condolences, we invite you to make a donation to the Cape May County Zoo in Kenneth’s name.

Kenneth Jerome Mount, age 65, passed away peacefully on May 2, 2021 surrounded by his loved ones at home in Cape May, NJ. Ken was born on July 15, 1955 in Chicago, Illinois to Jerome and Marilyn Mount. He graduated from Parks College of Saint... View Obituary & Service Information

The family of Kenneth Mount created this Life Tributes page to make it easy to share your memories.

Kenneth Jerome Mount, age 65, passed away peacefully on May 2,...