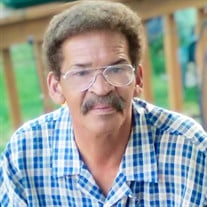 Kelly Freeman was born on May 10, 1957 in Cape May, New Jersey to the late Geneva Boyd-Freeman and the late James Freeman. He departed this life on July 17, 2021. Kelly was 1 of 14 children. He undoubtedly loved his family and loved spending time with them. In his younger years, Kelly worked side by side with his father and his brothers in construction and as a masonry. He later went on to work for Mr. Charlie Coleman, Raff’s Recycling and the Vassar Farm in West Cape May. Kelly was full of life and a jokester. He had many sayings that he made his own and only HE could express them in such a way. No one spoke “Okay” or “Aight” “ Okay Man” or , “I’m aight” in a more profound or funnier way than he. Through the years, he could be found spending time at any of his 9 sisters houses, having a beer or two with his siblings, nieces and nephews, jamming to oldies and talking trash. Wildwood was where he loved to be, visiting relatives and friends. His sister Reen’s house was one of his favorite places to visit in Wildwood. If you were looking for “Archie” in Wildwood, he was either at Reen’s, had just come from Reen’s or on his way to Reen’s. Kelly had a special and personal relationship with so many people, all of which loved and adored Archie for one reason or another. He had an especially close relationship with Ms. Ada Scott, who cared for him as one of her own children. Kelly was a die hard Eagles fan who enjoyed watching Westerns and his favorite movie “Remember the Titans” on repeat at his niece Quanette and her husband Charlie’s house. In most recent years, he and his sister Adell forged a tight bond, visiting with each other almost daily. He would look at her and say (in a way that only he could) “Love you sis, and I thank ya for everything you do.. Aight”, which was often followed by a chuckle, a grin and a shrug of the shoulders. Kelly may not have expressed love and gratitude in ways that others do, but family meant the world to him and he meant the world to them. Kelly is preceded in death by his mother Geneva Freeman and father James Freeman, his brothers Floyd Freeman, Calvin Freeman and his sisters Rachael Freeman and Gladiola Johnson. He leaves to cherish his memories, his son Tony Shockley and his daughter Kelina Shockley-Smith(Cedric). His grandchildren, Tequya, Kadija, Antonio, Keilyn, Amir, Ariah, Zuri, Tyquan, Chinashia, Takiya, Tony, Aajahnae and Lia. His great grandchildren, N’Skyah, Kendall, Ja’Nae, Jazmyn and Akeyah. His brothers and sisters, James “June” Freeman (Leola), Betty Ann Tony (Bobby), Clinton “Punch” Freeman (Denise), Carrie Ford (Samuel), Adella Greene (Rico), Denise Freeman, Katheryn “Reen” Ginyard (Clifford), Kathleen “Midget” Matthews (Robert) and Doris “Annie” Freeman. Additionally, Kelly has a host of nieces and nephews who will miss him. Kelly's family would like to give notice and invite relatives and friends to celebrate Kelly's life as they welcome you to attend his homegoing graveside funeral ceremony on Monday July 26,2021 at 11am in Seaside Cemetery, 559 Route 9 South, Marmora, NJ. The repast will be held at First Baptist Church, 8 W. Main St. Whitesboro, NJ (at the corner of Rt.9 and Main St.)

Kelly Freeman was born on May 10, 1957 in Cape May, New Jersey to the late Geneva Boyd-Freeman and the late James Freeman. He departed this life on July 17, 2021. Kelly was 1 of 14 children. He undoubtedly loved his family and loved spending... View Obituary & Service Information

The family of Kelly Freeman created this Life Tributes page to make it easy to share your memories.